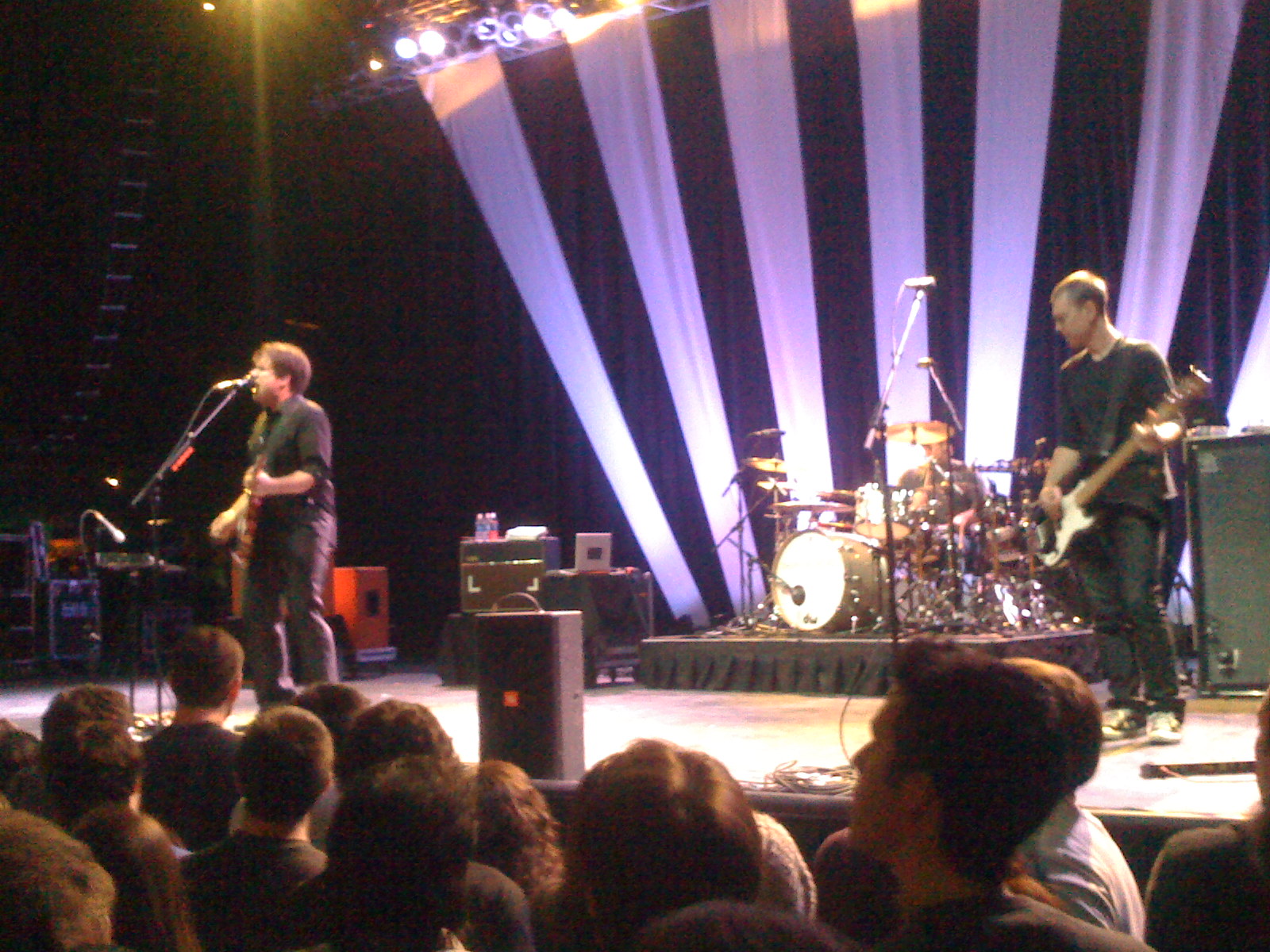 It’s been 10 years since Jimmy Eat World released ‘Clarity’ on Capitol Records. It was the first album that had Jim Adkins providing lead vocals, rather then Tom Linton. It wasn’t until leaving Capitol, and recording/self-releasing their next album ‘Bleed American,’ where the group made its jump to the mainstream, but ‘Clarity’ remains a fan favorite. So in recognition of this, Jimmy Eat World lined up a 10 city tour, to celebrate the 10 years it’s been since the record was released. I had the privilege to see them on their fourth night of touring at Boston’s newest music venue, the brand new House of Blues.
Opening band ‘Reuben’s Accomplice,’ who Adkin’s called one of his favorite band from Arizona, was the only other band on the bill. Despite their solid sound, and great music, the packed house seemed a bit restless (but I blame the general audience, as I enjoyed R.A. enough to pick up their EP).

When the group started with ‘Table for Glasses,’ it seemed like they could have recorded these songs yesterday. Having seen them many times, in a variety of different venues, there was something different about this night. They were up on stage playing a record that had a lot of meaning for them. On its release, the record just didn’t sell, and the band was dropped from Capitol. ‘Clarity’ and the events that followed are so significant to this band and their fans, that you could almost see their pride as they played through the set. They could have either given up ten years ago. Instead, they worked hard, toured, and recorded ‘Bleed American’ independently, and the rest, well is history.

The music was top-notch (a combination of the now superior sound system at the venue, and just how damn good these guys are at playing together), the crowd rocked to ‘Lucky Denver Mint,’ ‘Believe in What You Want,’ and were treated to a lengthier ‘Goodbye Sky Harbor’ (one of this reviewers favorite songs). Most of Jimmy Eat World’s shows have fairly elaborate lighting setups, not that its presence takes away from a show, but, it still is very interesting to note their absence for this show.

The crowd, as I suspected it would be, was made up of two types of fans. The ones that grew up with Clarity, and the fans who were there to hear ‘The Middle.’ Those kids got into the encore, where after playing oldie ‘What I Would Say To You Now,’ the band went right into ’23,’ ‘Work,’ ‘Pain,’ ‘The Middle,’ and closed with ‘Sweetness.’

For those of you who missed the show, the band has stated that they’ll be doing a longer tour soon enough. On a more personal note, I’m so glad Jimmy Eat World did this, because they were able to share a great moment in their personal history with the people they couldn’t have done it without, their fans.