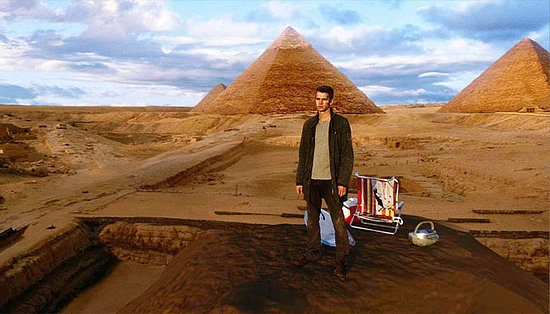 Science fiction films always have to stand across a difficult chasm: on one side there is a believable story with believable characters and on the other is conjecture, a world where anything can happen.  The makers of sci-fi films have to both set up this world and it’s limits, yet at the same time make it something of interest to viewers.  Sadly, Doug Liman’s “Jumper” doesn’t do either particularly well.

Based on a book by Steven Gould, it tells the story of David Rice a high school student who finds that he can ‘jump’ from place to place.  One minute he’s underneath an ice flow, seemingly doomed a cold and painful death, the next he’s sitting on top of the Sphinx in Egypt.

Because teenagers in movies are unable to ever have a normal relationship with their parents, David’s mom disappeared when he was five, leaving him with his dad who, judging by his dress and his attitude, is an alcoholic forest ranger.

David runs away from home, (alright, he jumps away from home,) and tries out his new powers.  Eventually robbing a bank and setting himself up in a swank New York city apartment, the movie doesn’t stop to ask questions such as, ‘Did David have to go before the co-op board before getting this apartment?’ ‘Didn’t anyone think it was strange he always paid in cash?’ ‘And why does he patronize the front desk clerk by inquiring about the Knicks if, as evidenced by the rest of the film and, frankly, their current standings, no one cares about the Knicks?’

Roland is an enigmatic figure who pops up at this point in the story, determined to catch the jumpers and stop them from jumping.  Later in awkward backstory, it is revealed that Roland is a Christian fundamentalist, who, along with his group, believe jumping is an affront to God.  (No word on how upset God is over people making mediocre sci-fi films that include Him as a justification for a flimsy plot.)  Roland is after David as well as Griffin, a plucky young English jumper who was added to the story, presumably so that the film would play well overseas.

David has the hots for Millie, a girl he went to high school with and he now takes her all around the world, seemingly arriving everywhere around 5pm where the magic hour light makes everything glow.  She quickly hops into bed with him in Rome and they have a lovely time.  Shortly thereafter, however, Roland shows up and the movie creakingly tries to muster the strength to have a climax.  (I mean, the movie tries to get excited about ending.  I mean… never mind.)

Doug Liman’s other movies, “Go,” “Swingers,” and “The Bourne Identity,” are all so focused on character, I foolishly thought that “Jumper” would be more of the same.  Bad on me.  Instead, the movie seems solely focused on the last five minutes, where apparently everything we just saw laid the groundwork for a follow-up film involving David and his mother, played by Diane Lane.  (Who, incidentally, runs through this movie so quickly that you’d think she was trying to avoid being recognized by the audience.)

Look, I’m all for silly science fiction, action movies.  (I liked “Logan’s Run” for God’s sake.)  But here, it’s downright ridiculous.  The movie makes a grab for your wallet, hoping it’ll have roped you into the story enough that you’ll be more than willing to shell out hard-earned cash for the follow-up film and, God willing, the video game tie-in.  This isn’t a movie, it’s a television commercial for another film.  -Sam