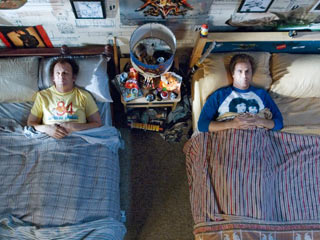 If you’re like me, you thought you’d had enough for Will Ferrell.  Every movie it’s the same, with him playing the overgrown child.  I get it, it’s not funny.  And then I saw “Step Brothers,” and all of a sudden, the things that I was growing so weary of seemed new and funny.  Maybe it’s because this movie snuck into and out of theaters this past summer incredibly quickly. Maybe because it was revered by friends who only spoke of it in hushed tones, afraid that someone would hear them and chastise them for still finding Ferrell funny.  But, damnit, this is one funny movie.

The plot is simple: Will Ferrell and John C. Reilly play Brendan Huff and Dale Doback, respectively.  Each of their parents are divorced.  And then they meet.  And fall in love.  And get married.  And suddenly Brendan and Dale become the titular stepbrothers.  And they hate each other.

However, they grow to love each other, these two 40 year-old misfits, who share the same favorite dinosaur.  Suddenly they’re also best friends.  And, or course, hijinks result.

And that’s it.  That’s the whole movie.  It goes without saying, (but I’ll say it anyway,) that Ferrell and Reilly make the movie.  Without them, this material seems boring, tired and, at worst, not funny.  However, they are both wonderful.  No one plays emotionally retarded like these two can.  The supporting cast is also excellent with Mary Steenburgen and Richard Jenkins playing Dale and Brendan’s parents.

If I had paid $9 to see this in the theater, I probably would be running around, trying to convert everyone to see this.  However, having seen it on DVD makes my fervor that much stronger.  This is the one that almost slipped past me.  I had no idea what I was missing.  Don’t make that same mistake.  “Step Brothers” is one of the funniest movies of last year.  See it.  -Sam