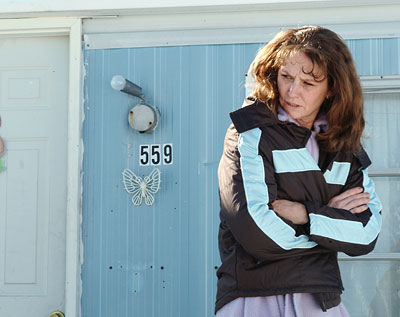 Courtney Hunt’s “Frozen River,” seems like the prototypical indie movie.  Just add water.  (Or, in this case, ice.)  It’s the story of Ray, a single mother after her husband relapsed and ran off with their down payment on a double-wide trailer.  She has two great kids, but the older one wants to get a job to help the family, which Ray won’t allow.  She ends up meeting Lila Littlewolf, a Mohawk woman who lives on the reservation that straddles the US/Canada border.  Lila is a known smuggler, bringing people over the border in exchange for cash.

Ray doesn’t know what to do.  She wants the better life for her kids, but can’t afford it on her salary.  (They’re currently having popcorn and Tang for breakfast.)  The first time she stuffs a couple people into her trunk, she doesn’t know what she’s doing.  She thinks she’s going with Lila to get some money owed her.  The second and third time, she knows exactly what she’s doing.  But she’s okay with that.  All she wants is enough to make a better life for her family.

“Frozen River,” sounds like a movie that is an hour and a half of depression.  Nothing but failed relationships and people who just can’t win.  It’s actually a tense and thrilling story.  Melissa Leo plays Ray with a combination of resignation and determination.  She doesn’t look at the long term.  She doesn’t have the time or the money to.  She simply looks at the decision in front of her and makes it.  She tries to do good.  She tries to make things right.  It doesn’t always work.  The story is completely on her shoulders and she’s in almost every scene.  Her performance is right on- it’s excellent.

The supporting cast, notable Misty Upham as Lila is resoundingly excellent.  They don’t look or act like movie stars, so there is no sense that anyone is safe.  Things are difficult of everyone.  Even Charlie McDermott’s T.J., tries to make things better for his brother and himself, and he almost burns down their trailer.

The movie is sparse; a cold landscape, cold characters and very little music.  The movie is also tense.  Hunt shoots the movie with a lot of close-ups and in tight spaces.  You feel like you’re on top of the characters.  You’re packed in the car with them.  The tension is palpable.   And that tension lasts for almost the full running time of the movie.  The camera work is also excellent.  The film is rife with wonderful vista shots and really does a great job setting up this world of these characters.  You feel the cold and snow in the movie.

It sounds like a painful movie to watch.  And sometimes it is.  However, the story and the acting is top notch and makes it something to check out.  The movie is full of good intentions.  Everyone just wants to do good.  However, in the world of “Frozen River,” no one can seem to.  -Sam