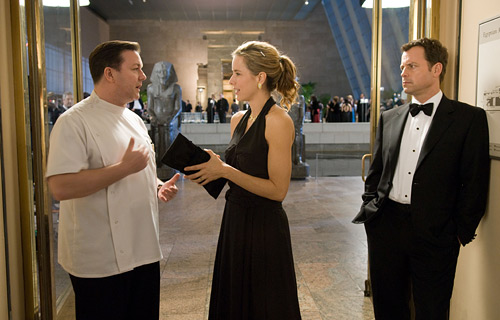 As a film aficionado, I should have done my homework, but when I popped ‘Ghost Town,’ into my blu-ray player, I had no idea it was Directed by David Koepp. Which wasn’t a huge surprise, given some of the same themes of ghosts with the “unfinished business” as found is ‘Stir of Echoes,’ albeit, a little less frightening.

‘Ghost Town,’ stars the very talented Ricky Gervais as Dr. Bertram Pincus, a rather unhappy Dentist who doesn’t much care for people. While undergoing a medical procedure, Pincus dies, and when he’s brought back to life, he can…see dead people.

These ghosts present quite a problem for Pincus once they realize he can see them, they all need his help. Frank Herlihy (Greg Kinnear), gets to him first. Herlihy’s widowed wife, Gwen (Téa Leoni), is going to marry a man he doesn’t approve of, and he enlists the unwilling Pinus to come in between Gwen and the new fiancée.

‘Ghost Town,’ is much lighter faire then ‘Stir of Echoes,’ its cute, its funny, a little bit of a date movie, and of course, a comedy slathered in the style of Ricky Gervais. It’s simple, and towards the end, fairly emotional. If you’re a fan of Gervais’ other works (the original ‘Office,’ and “Extras) this is certainly a must see. It was just a great, light, fun little movie.