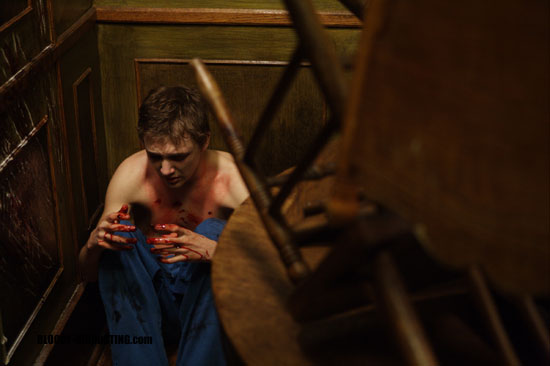 Sometimes you just want a good scare. I gotta admit, I haven’t been scared by a movie since I saw ‘Poltergeist’ as a child, so whenever a trailer comes out that looks like it has the potential to fill me with fear and dread, I’m there. ‘The Haunting in Connecticut’ is based on a true story of a series of paranormal events that happened in Southington, CT, in the 80s. The film was directed by Peter Cornwell, and written by Adam Simon, and Tim Metcalfe.

The film tells the story of teen Matt Campbell’s (Kyle Gallner) struggle with cancer, and the effects his fight is having on his family. The make the trip to the hospital easier, his Mother, Sara (Virginia Madsen) convinces her husband that they should rent a house near the hospital, so they don’t have to make the difficult trek back and forth for Matt’s chemo. She finds an affordable house, and the family moves in. Immediately, Matt begins seeing strange occurrences in the house, strange dreams, and weird visions.

It’s revealed that the house was formerly a funeral home, and the site of a some very peculiar seances.

The sound in the movie is one of its best parts, throughout the movie, I couldn’t distinguish the strange whispers and noises found in the film from the obnoxious teenagers that were attending a late screening of this PG-13 movie. The creaks, groans, and footsteps were mixed well, and amplified the uneasy mood of the film. There was some great tension, but, despite this great build-up, the movie falters as it speeds through the third act.

Overall, it was a fun little movie, but, it will just be thrown into the pile of “not-that-memorable, based on true story” ghost movies.

3 thoughts on “Review: The Haunting in Connecticut”