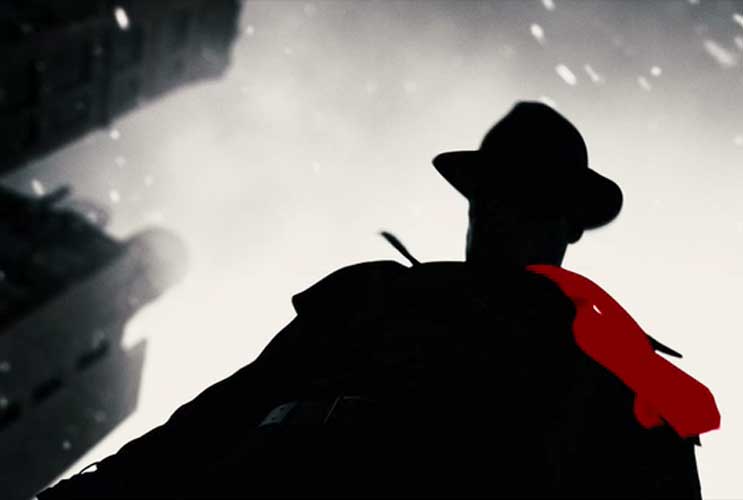 Frank Miller’s adaptation of Will Eisner’s well-known was lambasted upon it’s release Christmas day, last year.   The beating the movie received might have led one to think that the film was something terrible.  Something to avoid at all costs.  However, it’s not that bad.  In fact, in some instances, it’s kinda fun.

“The Spirit” tells the story of Denny Crane.  A dedicated police officer in Central City, he’s shot and dies.  However, he wakes up and finds that he’s immortal.  Bullets don’t kill him.  He magically heals.  He takes advantage of his believed death to take the name “The Spirit” and battle evildoers in the city.  The Spirit’s main nemesis is The Octopus, a villian who is, of course, bent on world-domination.  His sidekicks are two classic femme fatales; Plaster of Paris and Silken Floss.  The Spirit’s childhood sweetheart, Sand Serif is also a femme fatale, (this movie seems to only have one kind of woman,) back in town and also looking for The Octopus.  Meanwhile, The Spirit is flirting with Ellen Dolan, the city’s coroner who is fascinated with The Spirit’s inability to be killed.

This is comic-book writer Frank Miller’s second film, after collaborating with Robert Rodriguez to adapt his “Sin City,” for the big screen.  “The Spirit” finds Miller using his own drawing style as inspiration for the look of the film.  It’s practically black-and-white, with The Sprit’s red tie one of the few colors in the film.  The attention to detail, even in high-contrast film noir is excellent.  Sometimes Miller even creates a negative image, with the characters shown in shadow as they run across a totally white screen.

Gabriel Macht plays The Spirit and, perhaps he’s part of the problem.  While he’s not a complete whirlpool of charisma, he certainly can’t hold his own against Eisner’s colorful characters.  If you’re going to hold anyone’s attention when playing a scene with Paz Vega’s Plaster of Paris, and Samuel L. Jackson’s Octopus, you gotta have a strong presence.  Eva Mendes and Scarlett Johansson, two actresses I haven’t been the largest supporters of in the past are both enjoyable here.  In fact, they’re perfectly cast in their roles as women who are deadly, but also incredibly sexy.  The acting is also over the top, in fact, completely over the top.  It almost reaches a level of cartoonish acting, harkening back to a Warner Bros. cartoon in some scenes.

Miller’s direction is quite good, with the camera work and the frame always interesting.  The way he frames shots is reminiscent of a comic book panel, making the movie something that feels very one of a kind.  It’s a unique movie that stands out and has frames that you stay with you long after the movie ends.

Is this a great movie?  Well, no.  Is it a terrible movie?  No, it’s not.  Is it the end of cinema as we know it?  That’s a bit harsh.  This isn’t a perfect film, and I certainly understand that it’s not for everyone and, in fact, it could annoy some people.  However, it’s not the disaster that so many might have you believe.  It’s a perfect DVD movie.  And it’s not as terrible as everyone says it is.  If you like comic book movies, check it out.  You might even enjoy it.  -Sam