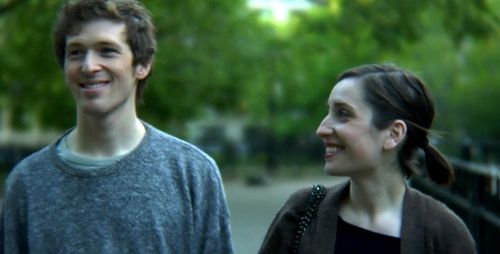 If relationships and break-ups weren’t hard enough, try making a movie about yours with your girlfriend.  Daryl Wein and Zoe Lister-Jones decided that they should break up.  However, instead of breaking it off, they decide to have days off and days on with each other, stretching out the break-up process to make it easier to handle.  The two then collaborated on a script about their attempt and the result was “Breaking Upwards,” a film that has already played at several film festivals, including SXSW and the Tallahassee festivals.

“Breaking Upwards,” screens at the IFFB Sunday, April 26th at 8:15 at the Somerville Theater.

Co-writer, director and star Daryl Wein took the time to answer a few questions about the movie, and the perils of trying to offer a new take on the romantic comedy.

LR:  The creation of “Breaking Upwards” was hardly normal.  Can you talk a little bit about that?

DW: Yes, it was very weird. Kind of therapeutic actually. My way of dealing with being in an open relationship was to immediately make it into a film.  Is that exploitative?  Maybe.  But I’m an artist and I need to draw from somewhere!  I started writing random scenes down while Zoe and I were still strategizing the break. We were going through a hard time.  It turned her off at first because it was so personal.  I remember badly wanting to see a fresh, new type of romantic comedy during this period. I was bored of the college stereotypes and meandering, slacker storylines representing people my age.  I wanted to see a film about twenty-somethings voicing real concerns.  A film that asked tougher questions about relationships.  It was pure coincidence that I had this feeling at the same time I was going through this with Zoe.  Kind of serendipitous, I guess.  It helped make the film more specific.

LR:  Dramatizing your relationship is one thing, filming it is another.  What was it like to re-create/re-imagine episodes from your life?

DW:  Also, kinda weird! Writing the screenplay was tough at times because we were constantly afraid of hurting each other’s feelings. We didn’t want to misrepresent anyone including our parents, who are only superficially based on our actual ‘rents. But we were also not

interpreting the story exactly how it happened. We were fictionalizing a lot of it. We used the conversations, events, and experiences Zoe
and I went through just as inspiration, as a foundation. During production, it was strange to re-visit similar conversations we had
together in real life. They were different but along the same lines in places.  There was one particular scene where we confront each other
about being with someone else that hit a little too close to home.  That wasn’t fun to relive.  But ultimately it helped give the film a
sense of rawness.  Being a real couple added to the chemistry our characters had with each other on screen.

LR:  New York is so often the backdrop for romance films.  How did you use the city in the shooting of this movie?

DW: We tried to show off New York City off as much as we could by using real people in the backgrounds of scenes and shooting in great neighborhoods.  We shot in Madison Square Park, Tompkins Square Park, the West Village, Chelsea, we even shot the Halloween Parade on 6thavenue with thousands of real people.  We had permits to shoot in most places.  There are some iconic buildings in a few shots like the
Empire State Building and the Flat Iron building.  I think they helped to give the film a true sense of authenticity.  But we used those
images sparingly.  We tried to show different streets and images than other films.  Also, it was important to not shoot anything hand held.
We combined dolly tracks, tripod and steadicam to achieve the overall look we were going for.  Our director of photography, Alex Bergman,
also lit everything in a vibrant way.  He made the city look really great. We were a low budget film but we were able to show a lot for a
little.

LR:  Was there ever a point in production that you thought, ‘that’s it, this is too personal?”

DW:  No, not really. We moved beyond the personal after we finished writing the screenplay.  We were balancing so many jobs through out the production that we didn’t have any time to reflect on actual experiences we may have been referencing while shooting.

LR:  You’ve said you made the film to offer a fresh take on the way 20-somethings were being portrayed in films.  What were you after?

DW:  As I said before, we wanted to dig a little deeper than what we had been seeing.  At least, that’s what we attempted to do.  We wanted to
show a more thoughtful side to twenty-somethings.  The people we knew who analyzed every moment of their relationship.  The ones who talk things to death.  They text each other every minute.  Call every hour.  Those were the types of neurotic couples we wanted to represent.  We tried to ask harder questions, to write a real clear beginning, middle and end, to take the classic model and inject it with new life.

LR:  What do you want audiences to take away from the movie?

DW:  I hope audiences are entertained and moved emotionally.  I hope they continue to question what relationships are all about.  If the film
can offer any new insight to people struggling with monogamy, or just get people thinking about it in a new way, than I feel like we
succeeded.  Also, I want people to buy our soundtrack, so we can pay off our damn credit card bill!