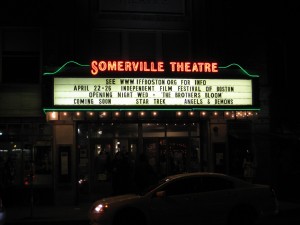 I’d say we’re off to a great start. Tonight’s screening of ‘The Brothers Bloom,’ marked the beginning off the 7th annual Independent Film Festival of Boston. The film was received warmly by an excited (though slightly damp, due to a conveniently timed downpour) audience. ‘The Brothers Bloom’ is writer/director Rian Johnson’s second feature film, the first being the excellent ‘Brick.’ Johnson was in attendance, and stuck around for a Q&A. Read the full review of the film here.

I keep saying this, IFFBoston is a great festival, so if you’re in the area for the next week, do yourself a favor, buy a ticket and go see a great film. And feel free to check out some of the ones we’ve previewed here on the site.

One thought on “IFFBoston Kicks Off!”