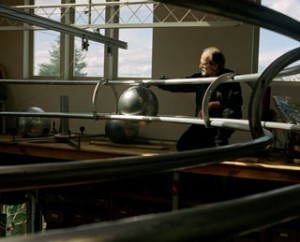 ‘Trimpin: the sound of invention’ is a feature length documentary from Peter Esmonde about musician/composer/inventor Trimpin. The timeline follows Trimpin as he is working on a performance with the Kronos Quartet, in which they will use many of Trimpin’s curious instruments.

We follow along with Trimpin as he collects various items, everything from used gears and cogs, to glass spheres, and tv tubes. The German-born Trimpin is part artist, part mad scientist, and Esmonde’s film paints an in-depth portrait of a curious artist.

The film showcases many of Trimpin’s creations such as a wooden-clog installation (that of course, plays music), and tower of self-playing guitars (an installation made for the Experience Music Project in Seattle). The story is told primarily through Trimpin himself, with limited commentary/input from others. Esmonde crafted the film as a fly-on-the-wall, giving Trimpin the opportunity to speak for himself, rather on listening to other peoples interpretations of Trimpin’s life and the meaning of his works.

My favorite moments in the film were the times Trimpin would stop, and just listen. Whether it was listening to the echo of his hands clapping, or the squeak of a television tube as he was wiping it down with a rag. After 80 minutes, you really felt like you knew Trimpin.

‘Trimpin’ is a great film because it captures the legacy of this curious artist. Which is important, because Trimpin refuses to have any of his works recorded, and insists that the only way to truly experience his projects are in person. I just may have to do that.