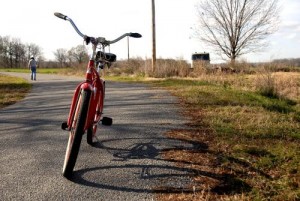 ‘Invisible Girlfriend’ is a fascinating documentary about bi-polar paranoid schizophrenic Charles, and his journey via biciycle from Monroe, LA to New Orleans to meet up with his girlfriend. Sound’s pretty straight forward right? It gets complicated once you realize Charlie’s girlfriend is invisible, and she happens to be Joan of Arc.

‘Invisible Girlfriend,’ is an interesting journey, because on the 400-odd mile trip, Charlie seems to touch the lives of some of the people he runs into. His friendly, almost child-like behavior has many people wanting to help him out. The film could very well be a narrative, and perhaps thats what makes it even more special, that it seems too unreal to be true. But I assure you, it is all very real. From stopping at a cattle ranch, to talking to an old man about his home-made tin-man lawn ornament, the journey is full of touching moments.

The pacing of the film is excellent, it moves very fast, and the level of emotion is a constant slope until they very end. Directed by David Redmon and Ashley Savin, ‘Invisible Girlfriend,’ is a touching look into the mind of Charlie. Charlie doesn’t see the world like others, and while some may call him crazy, for some reason, he does a very good job of convincing the viewer that he isn’t.