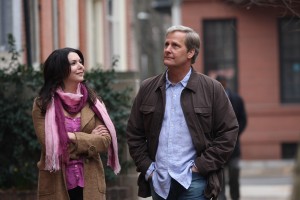 ‘The Answer Man,’ written and directed by John Hindman is a romantic comedy starring Jeff Daniels, Lauren Graham, and Lou Taylor Pucci. The film tells the story of an author named Arlen Faber (Jeff Daniels), author of “God & Me,” a book of answers Arlen allegedly received from the Man himself.

The film opens with a montage of the announcement of “God & Me,” and the subsequent storm its publication had on the world. From spin-off self-help books, to cook books, the world is caught up in the storm of Arlen’s answers from God. It quickly flashes forward 20 years, where we meet the legend Arlen Faber. Arlen is desperately trying to connect with God, reading volumes of book looking to unlock the door to heaven.

We also meet Elizabeth (Lauren Graham), a single mother who has opened her own chiropractic business, and Kris (Lou Taylor Pucci), a book-store owner who has recently left rehab. Arlen’s book agent is begging him to do something special for the 20th anniversary of the book. Arlen clearly doesn’t want to deal with the people that his book attracts, and does everything he can to avoid any sort of recognition.

The film is fairly funny, but it was difficult for me to grasp Jeff Daniels as anything but a a nice guy. Arlen Faber is a character that I’m supposed to dislike for being sort of a bitter recluse, but even at his worst moments, I still liked him. I’m not sure if that is just the look that Daniels has, or just the way that he played the part.

The premise of the film is interesting, and I think there were a lot of paths the story wanted to go, but I felt like certain things got a bit detached. I wanted to know much more about Arlen’s own feelings about “God & Me” during the natural course of the story, but I only got it in the last act. The best character in the film was Kris, and his relationship with his alcoholic father. There was a lot of potential here, but again, I felt that everything was just spread so thin, that I couldn’t feel as much compassion for him as I should have.