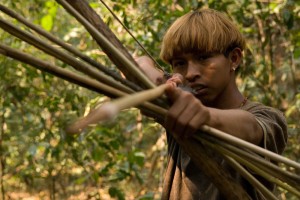 ‘Birdwatchers’ tells the story of a group of natives called the Guarani-Kaiowà from Brazil who decide they no longer want to live on the reservation, and want to take back the land that is rightfully theirs.

The land that they move to belongs to a wealthy landowner who grows crops, and raises cattle. The film opens, introducing two young natives moving through the forest hunting, when they discover two women they know who have committed suicide. This tragic event inspires the tribe to move onto the ancestral lands and set up camp. A relationship forms between one of the young natives, and the daughter of the landowner.

I applaud the film in its way of storytelling, director Marco Bechis tells us the story in a very hands off manner. The films beginning, middle, and end, aren’t as clear, the film as a whole feels like a series of events. Events in which the audience is a witness. The film definitely has a message, but it does an excellent job of not forcing that message on its audience. Much of the story is told through action rather then dialogue.

‘Birdwatchers,’ tells a painful story of one of the worst realities in Human history. The way that we’ve treated indigenous people is shocking, and hopefully, films like ‘Birdwatchers’ will find their audience.