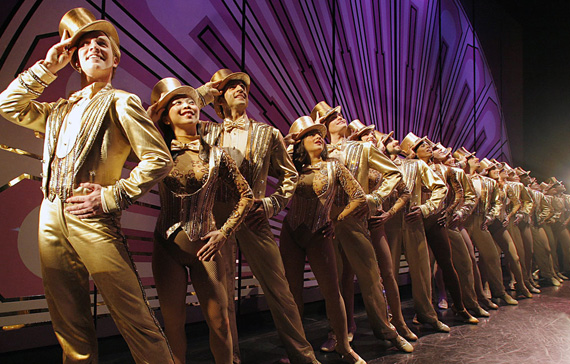 “Every Little Step,” is about the casting and the try out process during the casting of a 2006 revival of the Tony award-winning musical, “A Chorus Line.”  The musical first played Broadway in 1975, and has been a popular show around the world ever since.

The show’s genesis came in 1974, when Michael Bennett gathered a group of Broadway dancers for a 12 hour marathon conversation about their lives and their time spent being little appreciated back-up dancers on-stage.  Bennett then took these stories and crafted a story and, working with others, created songs to tell the real-life stories.

The show was an instant hit.  The premise was simple.  A group of eight dancer audition for a show, each telling a story about their life and what brought them to that moment.  They’re not trying out for a leading part, they’re simply back-up dancers.  The stories are funny, touching and heart-breaking.

“Every Little Step” follow the dancers trying out for the 2006 revival.  Each of their stories is incredibly touching and interesting.  The film doesn’t follow the behind-the-scenes decisions too closely; what’s interesting to filmmakers James Stern and Adam Del Deo is the audition process.  And that’s all the movie really is.  As the dancers move up the ladder and the number of actors diminish, the tension grows.

What’s most impressive about the movie is the fact that there is almost nothing in it but auditions and actors talking about their careers.  It’s a backstage movie where what happens backstage seems of little importance.  For all of these actors, a role in this play is a huge stepping stone.  Maybe it’s the first thing they’ve tried out for and a leap to expect to be on Broadway.  Maybe they’ve been thirsting for it their whole life.

What Stern and Del Deo do is strip away anything that could distract from the characters, both on-stage and off.  You are taken audition by audition, callback by nerve-wracking callback.  By the time the curtain goes up at the end of the movie, you feel as if you’ve gone through the same process as the actors.

That’s not to say that “Every Little Step” is a depressing movie, or a pain to sit through.  Not at all.  The film finds spark and excitement in a look in a move, in a routine.  The tiny joys that actors find is what this film celebrates.  And that’s what makes “Every Little Step” worth celebrating.  It’s a wonderful, uplifting and fun documentary.  Perfect for people who think they don’t like documentaries.  Check it out.  -Sam