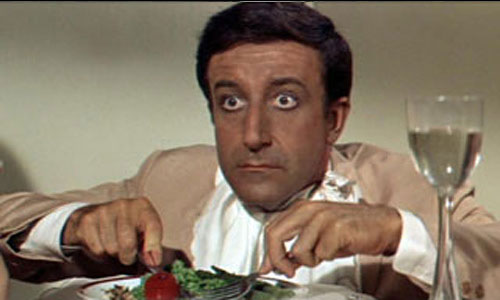 Sellers plays Indian actor Hrundi V. Baskshi, an actor brought to Hollywood from India.  As the movie opens, he’s working on a “Gunga Din,” like movie.  Unfortunately, he blows up the set before the cameras are rolling.  The producer is furious and in his office, jots down Baskshi’s name, so that he can make sure he never works in this town again.  However, due to a mix up, Baskshi is not blacklisted; he’s instead invited to a party at the producer’s house.

That is the first five minutes, and the rest of the movie is the titular party.  The entire movie is clearly inspired by Jacques Tati’s Monsieur Hulot and isn’t bashful about showing it.  Baskshi is not always the butt of the joke and often he sets off something, but moves off before he can see the full repercussions of his actions.  In fact, as the movie progresses, Baskshi is revealed to be one of the few normal people at the party.  There are several great set pieces that you can see Sellers really sinking his teeth into.  There’s a great sequence involving Baskshi and a jammed toilet that is entertaining and amazingly never gets vulgar.  There’s also a scene where Baskshi tries to feed the producer’s bird treats he calls “Birdie Num Nums.”  The other standout actor is Steven Franken, who plays a waiter.  During the dinner sequence, Franken steals the movie from Sellers.  Some of the gags with him pouring the wine are wonderful.  Edwards also sets up a wonderful shot involving a swinging door.  The love interest is played by Claudine Longet and she has little to do other than stand there and look pretty, but she does it well.

The whole movie was shot on a soundstage and while it’s a story and movie completely of its era, there’s something charming about it.  In fact, the whole movie experience is charming.  It’s not always laugh out loud funny, but it’s always worth watching.

“The Party” is the type of movie they don’t make anymore.  (The fact that Sacha Baron Cohen is considering a remake doesn’t make this sentence untrue.  Even if it gets made, it won’t be like the original.)  It’s quaint, cute and charming.  Something you don’t see much of anymore.  Peter Sellers takes a role that could be incredibly offensive, (one must try to watch it and ignore the blatant racism; I think this was one of the reasons that I was so hesitant to watch the movie, who wants to watch an ignorant movie that is trying to be funny?) and makes him a sympathetic and caring character.  Usually in movies like this, it is the non-white character who is out-of-touch and clueless.  In “The Party,” Baskshi is revealed to be the more alert and normal character in the movie.

“The Party” is not perfect.  (The racist element makes it hard to rank higher among Sellers’ work.)  However, it is a light and airy story, something that is incredibly difficult to pull off.  The fact that they do, however, is certainly a reason for a party.  -Sam