Skip to content
home Editorial, Feature, Movies, News Editorial: If You See Something, Say Something 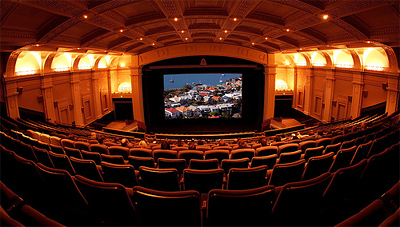 A month or so ago, I wrote an editorial criticizing AMC Movie Thetaters for a terrible experience I had where the manager made it clear that he cared more about money than giving audiences what they paid for.  And earlier this week, this story breaks.  Comedian Aziz Ansari, (now co-starring on TV’s “Parks and Recreation,”) posted on his Twitter account the following:

“I went with a friend of mine to see Star Trek: The IMAX Experience at the AMC Theatre in Burbank today. I drove out of my way to see the film on the large IMAX screen and paid an extra $5 for the ticket, which felt worth it at the time. However, we get in the theatre and its just a slightly bigger than normal screen and not the usual standard huge 72 ft IMAX screen. I was very upset and apparently this problem is happening all over at Regal and AMC theatres. “REGAL, AMC, and IMAX – You are liars! Boycott them. Fuck them for taking advantage of people and charging them $5 extra. If you’re in LA, go to the Arclight from now on, and fuck the IMAX screens (fake and real).”

I spoke with several people from AMC following my problem with the screening and now this hits.  Frankly, I’m not surprised.  The quality in projection and sound has been on a pretty serious decline in these chain theaters.  I find myself more often than not complaining to the manager about the poor quality of their screening.

AMC assured me that they have addressed the problems that I had.  I then wrote a follow-up editorial thanking AMC for appearing to take the issue seriously and for trying to make the theater going experience better.  I also urged viewers to stay vigilant.  After reading the above comment by Aziz, the only thing I can do is repeat what I said before: stay vigilant.

Everyone needs to hold theater owners and managers accountable.  If you are having a bad experience at a theater, say something.  If they’re misleading people and charging more for a bigger screen and not delivering on the true IMAX experience, someone needs to stand up and cry foul.

Aziz Ansari lobbed the first charge.  The rest is up to you, the theatergoer.  If you’re unhappy, YOU MUST SAY SOMETHING.  When I complained to the manager about the poor quality of the audio on the projector, he told me that “if 100 people see the movie and only 2 complain, well you do the math.”  We as a collective need to make sure that the ratio gets to a point that they will be forced to do something if for no other reason than financial gain.