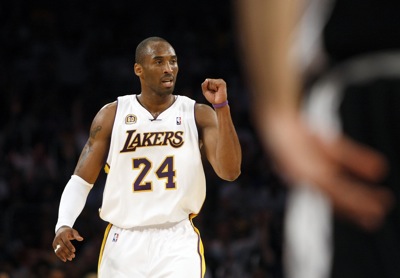 Spike Lee is a filmmaker who is worth keeping an eye on because he seems able to pull together a great movie when you least expect it.  He’s tried all sorts of genres, comedy, drama, musical, documentary… looking at his filmography, you would be forgiven if you thought that there was nothing that Lee couldn’t do.  However, you would be mistaken for believing such things.

“Work,” has a premise so simple, it could come off as genius- a day in the life of NBA superstar Kobe Bryant.  The movie focuses on a game between the Lakers and the San Antonio Spurs.  Lee miked up Bryant for the game, got permission to film in the locker room, and had 30 cameras at the ready to cover every angle of the game.  If that wasn’t enough, Lee then brought Bryant in to watch the footage and then comment on the action.

The footage is amazing.  Lee seemingly picks the most interesting angle every time, and you get unprecedented insight into the game.  You also get to see one of the great minds at work, as Bryant talks to teammates, calls plays on the fly, and trash talks his opponents.  To watch Bryant, or really any basketball team who are at the top of their game can and would be something incredibly interesting for sports fans.  The movie takes you into the player-to-player talks during the game.  You hear Bryant talk to a teammate during a free-throw, plotting out the next play.  You hear coach Phil Jackson in the locker room, try to explain what he would like the team to do, breaking down film as they try to adjust their game for the second half of the game.

And the work of cinematographer Matthew Libatique is wonderful.  Having shot mostly big-budget movies, (“Iron Man,” and other non-documentaries,) it is interesting to see how he organized and shot such a complicated project.  The movie is a perfect fly-on-the-wall look at professional basketball in 2008.  It could be a great, verite, interesting movie.

The use of the word ‘and’ in that last sentence is, sadly, chosen very specificly.  Lee sabatoges himself and this project from the first minute.  In setting up and in pre-production for this movie, Lee decided to let Bryant talk after the fact.  It is this voice, that comes in and interrupts, disrupting you when you just want to hear what they’re saying, that Bryant decides to talk.  Bryant comes in, trying to explain what he’s thinking, what he’s doing.  So often, however, it is a distraction and nowhere near as interesting as the footage Lee captured.  Instead of taking the best comments from Bryant, instead of letting the movie have moments of action and just the sound of the game, and other moments of insight, Lee lets Bryant ramble over everything, stripping the movie from sequences and movements, and instead, leaving the entire project seem like a DVD’s director commentary.

It’s as if Lee doesn’t trust the footage to stand up for itself.  If he thinks every image needs to be explained.  It’s a damn shame because the footage is so wonderful, this could have been a silent movie.  Instead, the soundtrack just rambles on and on, and squanders away all this wonderful footage.  The audio is what ruins the movie, sadly.

There have been great basketball documentaries made before.  (Most notably, “Hoop Dreams.”)  And “Kobe: Doin’ Work” could have been the professional side of the story.  However Lee simply lets what’s most interesting about this project dribble away.  -Sam