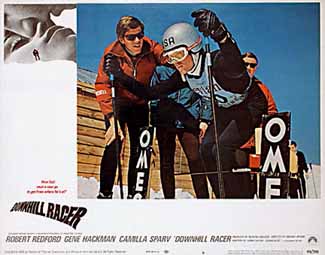 I think I have underestimated the work of Michael Ritchie.  Sure, I enjoyed his later work, (especially “Fletch,” and the original “Bad News Bears,”) but I always thought of him as a middle-of-the-road director. One who could produce solid work, but work that wasn’t particularly memorable or excellent.  However, one only needs to look at “Downhill Racer,” his directorial debut, to see that this assumption was not always the case.

Based on Oakley Hall’s novel and with the screen play written by novelist and short story writer James Salter, “Racer,” is very similar to one of Salter’s stories.  What is important is not what is said, but what is unsaid.  The film is brief and sparse.  And it’s the better for it.  There is a realism that permeates the film, due in no small part to this much more realistic approach.

David Chappellet (Robert Redford,) is a downhill skier, competing in the US.  He’s called to join the US team in Europe after a skier is injured and the team needs someone to fill his place.  Chappellet is cocky and self-sure, despite the fact that he has no laurels to rest upon.  His coach Eugene Clair is played with toughness by Gene Hackman.  Clair is not one to deal with individuals who don’t follow the rules.  When Chappellet decides that he’s not racing if he’s not one of the first skiers down the hill, Clair tries to teach him, but eventually lets Chappellet be himself.

The highlight of the film is the racing sequences.  Ritchie does a wonderful job of evoking the speed and excitement that one gets racing down a hill.  The racing is also shot like a documentary, with the camera panning and zooming to try and catch the action and pick the actors out of the crowd.  The music is also, for the most part, in the background, again evoking realism by not responding to every single beat with a musical response.

Overall, the movie drags a little, but you have to respect Ritchie for sticking to his guns and keeping the realism in the forefront.  Ritchie and Redford teamed up again a few years later to create the even better “The Candidate.”  That is available on DVD.  “Downhill Racer” is not.  It’s a shame.  This is one movie that doesn’t deserve to fall between the cracks.  -Sam