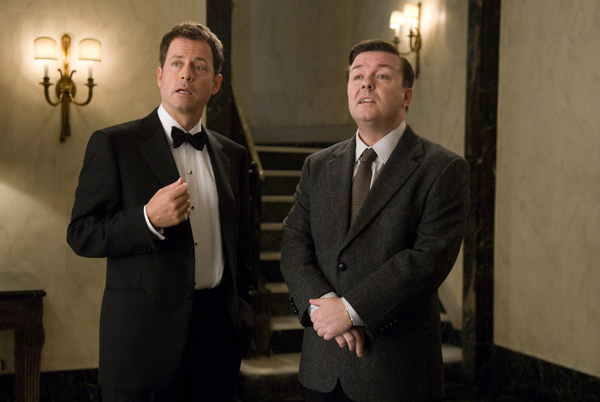 You ever have one of those nights where you just don’t want something too deep?  Maybe you want to have a nice dinner, enjoy a glass (or a bottle of wine) and watch something that, while it doesn’t make you laugh out loud over and over and over, by the end you’re smiling.  If that is what you’re looking for, may I present “Ghost Town.”

Written and directed by David Koepp, best known for writing the scripts for “Jurassic Park,” “Spiderman,” and the most recent “Indiana Jones film, the movie stars Ricky Gervais, best known for creating and starring in the British “Office” TV show.

Gervais plays Dr. Bertram Pinkus, a dentist who doesn’t really like people all that much.  He jams cotton into the mouth of the talkative patients, and races past his doorman to get into his apartment to be by himself.  However, after going in for a routine medical procedure, he comes to and realizes he sees people that everyone else doesn’t.  Turns out he died during his procedure and, after they revived him, he can see dead people.  As soon as the dead realize that, they start following him.  Each one has a favor they need done.  Frank (Greg Kinnear,) is a ghost who is particularly persistent.  He lived in Dr. Pinkus’ apartment and his wife Gwen (Tea Leoni) is about to marry another guy- someone he can’t stand.  He needs Pinkus to break them up.

The rest of the movie is rather cookie cutter, insert tab A into slot B kind of story.  However, Kinnear, Leoni and especially Gervias make it work.  You can see the ending coming a mile away, but the story and the acting is charming enough that you don’t care.  It’s a fun movie and you sit there with a smile on your face the entire time, even if you’re not laughing out loud constantly.  And Koepp saves one nice surprise for the audience members who think they know exactly how it’s going to end.

“Ghost Town,” doesn’t hit it out of the park, but it’s a movie I’ve found myself thinking about from time to time in the few days since I saw it.  It’s charming, quirky and funny enough that it’s worth the 90 minutes.  Sometimes charm can go a long way.  “Ghost Town,” has charm to spare.  -Sam