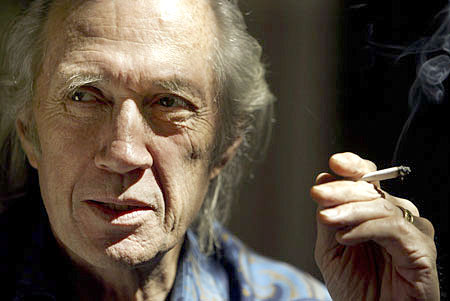 David Carradine is dead.  Long live David Carradine.  Actor David Carradine died Thursday in Thailand at age 72.  He reportedly committed suicide, though his wife, friends and producers of the film Carradine was shooting dispute that idea.  Everyone has written their obit piece, so there’s no nead to do another.  However, what I would like to do is focus on his work.

Carradine first rose to prominence on TV with “Kung Fu,” a show I had heard a lot about, but never seen.  I ended up checking out season one in the wake of seeing Carradine’s appearance in “Kill Bill.”  Carradine played Kwai Chang Cane.  He was the perfect fit with the material, playing a student in the art of kung fu.  Carradine gave Cane a great presence and silence and intelligence.  His slow, calculated though process was work that you could see.  Think about that for a moment.  Carradine showed the character thinking.  Impressive stuff.  It was a Carradine trademark.

He also appeared in over 100 movies, so I’ll just talk about a few of my favorites.  “Death Race 2000,” (which was recently re-made,) was one of Carradine’s best known movies.  In it, he played Frankenstein, a driver taking part in a deadly car race set in the future.  Again, Carradine plays Frankenstein as silent, communicating so many emotions through his eyes.  The movie is completely over the top, but Carradine brings a quiet, calm as the center of this whirlwind.

His Woody Guthrie in “Bound For Glory,” showed that, when given the chance, Carradine could deliver.  The movie and the story is great, and Carradine is equally impressive.  He received a Golden Globe nomination and well as the Best Actor award from the National Board of Review for his work.

I only recently saw “Thunder and Lightning,” a moonshine chase film probably best classified as “Hixploitation.”  While it wasn’t the greatest of movies, I got a real kick out of it.  Again, Carradine played the role of Harley Thomas as a really smart, quick-thinking guy, but also someone who was more content to act rather than talk about it.  The movie is a really great fun movie that if you haven’t seen, I highly recommend.

And then there’s “Kill Bill.”  Carradine’s performance as Bill was really great work.  Bill was a threatening, intimidating, scary figure.  He didn’t even appear in part one, but you knew you needed to be afraid of Bill.  Talk about a build up: you have to wait until the second movie until you actually see the villian.  Another actor might have shrunk under the pressure that Tarantino’s script puts on the character.  However, Carradine approaches Bill as someone who is both silently and deadly.  And as soon as Bill finally appears on-screen, you know that you need to be scared.  Bill is capable of anything.  Yet, he’s also able to play with The Bride’s daughter at the same time.  It’s yet another impressive turn.

Some might shrug off Carradine’s acting.  Appearing in over 100 movies, many of them not “A list” projects, but watching Carradine movies, you can always know and take solace in the fact that at least Carradine will be good.

This weekend, pick up one of Carradine’s movie.  Sit back and enjoy.  David Carradine will be missed.