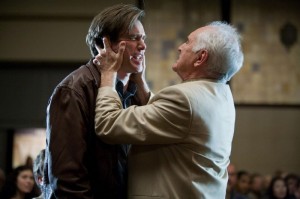 The one thing I can say about ‘Yes Man,’ is that nothing about this film surprised me. The fact that it was made, and who it starred, and the fact that it met my expectations exactly. Though, none of this is a good thing.

‘Yes Man,’ is a situational comedy, and yes, much like ‘Liar, Liar,’ minus the fantastical parts, ‘Yes Man’ stars Jim Carrey as a man who can only say yes to things. But this time, at the beckoning and insistence of his friends, not his son. Adapted from a book by British writer Danny Wallace, ‘Yes Man,’ tells the story of Carl Allen, a bank employee who is persuaded to attend a self-help seminar that advises its followers to say yes to everything, no matter what. He is convinced by the motivational guru (a very hilarious Terence Stamp) to enter a covenant. Carl goes from no-man, to yes-man. And you guessed it, the rest is predictable.

‘Yes Man,’ stars one of my favorite young actresses, Zooey Deshchanel, but even she can’t save the movie from a downward spiral of typical situation after situation. The movie is so cheesy, so predictable, and offers nothing of value. In three weeks, I’ll forget that this movie even exists. I mean, was Jim Carrey bad? No. Was he good? No. He was forgettable, and to think how far he’s come since he graced us with Ace Ventura. ‘Yes Man,’ is a giant step backwards, but a step that he will quickly recover from. Even

The film was perhaps written as an example of the boring old formula. Man is depressed, man changes life, man is happy, man realizes what he changed actually isn’t as good as he thought, man finds happy medium, man lives happily ever after. Literarily, I just summed it up, read that sentence, watch the trailer, and you’ll get the same experience I had without losing 104 minutes from their life..