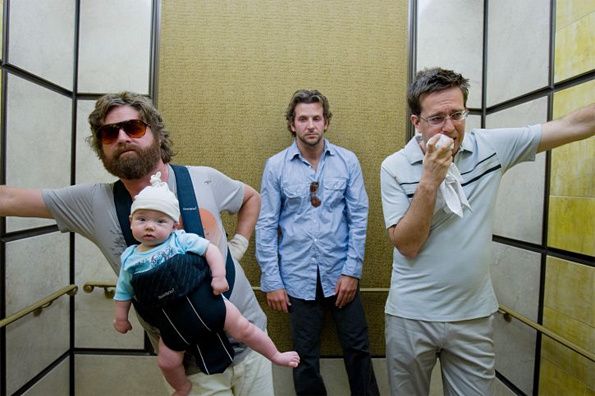 Todd Phillips’ latest movie is the perfect one-sentence summary: three guys wake up in Las Vegas after a bachelor party, not knowing what happened the night before and find the future groom missing.  What happens next is the plot of the movie.

I’ll start off simply: “The Hangover,” is an incredibly fun night out at the movies.  I’ll elaborate: If you didn’t know who Zach Gilifanakis was before this movie started, you’ll know who he is now.  He not only steals the movie, he runs away with it early on and never looks back.

Doug Billings (Justin Bartha,) goes to Las Vegas with his two best friends, (Bradley Cooper and Ed Helms,) and his future brother-in-law, (Gilifanakis).  They sneak out onto the roof of their hotel to share a drink before heading out for the night.  However, as things turn out, that’s the last they remember.  Cooper has a hospital admittance bracelet on.  Helms, (a dentist,) is missing a tooth.  (Oh, and he got married.  To whom, he doesn’t know.)  And Gilifanakis awakes to find a tiger in their bathroom.  And Doug is missing.  The three remaining guys try to unravel what happened the night before.  I don’t want to give away too much of the story, but it involves a stripper, $84,000, and Mike Tyson.

These sorts of movies aren’t supposed to be high art and you’re not supposed to remember them shortly after they finish.  But “The Hangover,” is one of those rare movies that you find yourself quoting lines to yourself and friends for weeks afterward.

It is the acting talent and the dedication of Helms, Cooper and Gilifanakis that make the movie work.  They’re the ones that make the movie sing.  While much of the movie is laugh-out loud, if you’re not laughing, you’ll be grinning goofily, as you delight in the situations and the characters.

I don’t know what else to say; I don’t want to spoil the movie.  All I can say is that if you’re looking for a good, fun movie, look no further.  “The Hangover” delivers.  It will work its way into your everyday vocabulary.  Get ready.  -Sam

One thought on “Review: The Hangover”