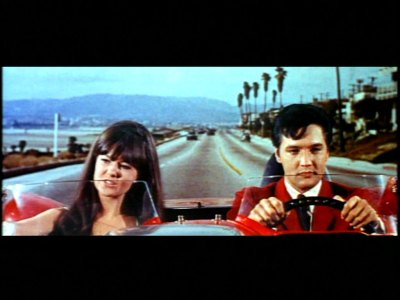 The films of Elvis Presley are almost completely fluffy and forgettable.  1967’s “Clambake” is no exception.  That said, while these films are playing on the screen, there is something continuously entertaining about them.

In “Clambake,” Presley plays Scott Hayward, the son of a well-known and well-heeled business owner.  As the movie opens, Scott, bored with his life, meets Tom Wilson at a roadside stop.  He offers to switch lives with him.  Tom is more than happy to comply.  Both swap rides, (allowing Presley to spend the rest of the movie driving a motorcycle,) and head to the same hotel.  Scott, (now going by ‘Tom,’ takes a job as a water-skiing instructor.)  Tom, now going by ‘Scott,’ throws his new-found money around, wooing a wide and varied number of girls.  Scott, however, has eyes for Dianne Carter.  Unfortunately, she has the hots for Tom.  Scott befriends an older businessman and he allows Scott to do some repair work on his speedboat, just before a big money race.  Will Scott win the race?  Will he win Dianne’s heart?  Will he sing a bunch of songs?  What do you think?

“Clambake” falls in the category of ‘forgettable Elvis films.’  (For my money, only “Jailhouse Rock,” and “Viva Las Vegas,” fall into the “Elvis films worth remembering” category.)  It also features several newly written songs, allowing Elvis to make a mockery of his status as a rock legend, singing nonsense songs and lyrics.  The movie also presents songs in a way that completely stops the movie for a song, and then, as soon as the music is finished, the movie’s plot resumes.  Thus, we are treated to “Confidence,” sung to school children on a playground.  Why?  Are there children in any other scene in the film?  Of course not.  (To say nothing of the rather astoundingly terrible chorus of “C-O-N-F-I-D-E-N-C-E.”  Not particularly memorable.)  The title song is also pretty forgettable.  Why are they having a clambake?  Has anyone discussed a clambake before this song?  Was the audience longing for a song about a clambake?  Is there a dance to go along with this song?

What makes almost all Elvis movies worth checking out for fans is the King himself.  While he’s not the greatest actor, his presence and charisma is palpable and you are entertained whenever he’s on the screen.  (Were the same only true for the other actors.)

“Clambake” offers nothing new to the cannon of Elvis movies.  That said, if you’re a fan of The King, you could certainly do worse.  Check it out.  -Sam