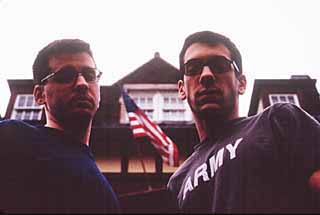 Todd Phillips is best known as the guy who introduced a the world to Frank the Tank, Starsky, Hutch and future brother-in-law Allan.  However, Phillips started off as a documentarian. His first film, “Hated,” offered a look into the life of controversial punk rock musician G.G. Allin.  Phillips’ second film was originally supposed to air on HBO, but they balked.  The resulting movie, “Frat House,” won the Grand Jury Prize for documentary features at Sundance.

“Frat House” is an inside look at the hazing rituals at fraternities at several unnamed schools.  Originally set to film at only one fraternity, the filmmakers are eventually asked to leave the house, after several members of the frat start to feel uncomfortable at the presence of cameras.  The filmmakers cast about, looking for another frat to film.  No one took them up on the offer.  Finally, desperate to finish their movie, the filmmakers struck a deal with a frat- they would be allowed to film, but they would also have to rush.

“Frat House,” is scary- a lot of yelling, a lot of college students who seem completely wrapped up in their house and their God-like power.  The main villain in the piece is a frat brother known as Blossom.  Despite the incredibly fey nickname, (something people in the movie seem way too terrified to point out,) he yells and curses and throws things.  Clearly at home in the 10 week hazing period of recruits, Blossom asks questions that are rhetorical, insisting that no one talk, then berates rushes who answer his questions.  He also threatens the filmmakers, after seemingly striking a deal with them to ensure that they can finish their movie.  His most cryptic threat is when he yells at the directors, “I’m going to come down there and haze you.”  I wondered what happened to Blossom after graduation.  Did this self-deluded bluster hold up outside of the frat house, or did he end up in a job involving a paper hat and a nametag?

“Frat House,” offers to take viewers into the heretofore inside secret world of frat houses.  After the movie’s premiere, there have been allegations that the filmmakers worked with the houses to recreate scenes and that the movie was more fiction than documentary.  While not admitting to recreating scenes, Phillips has said that reenactments are a frequent staple in documentaries.

Whether “Frat House,” is completely authentic or not, if one frame of this movie is true, than this is a scary program.  Phillips and co-director Andrew Gurland have said that this movie is supposed to be a comedy.  The fact that the movie laughs off various deaths from hazing seems to prove the director’s belief.  However, they do little to tip their hand that it’s okay to laugh as they gravely intone their travails as they struggle to make this movie.

“Frat House,” is not available on DVD, supposedly because of the legal problems following the signing of releases by frat members only when they were drunk.  And there’s that whole pesky ‘factual’ part of the story.

Either way, “Frat House” is a fascinating movie and worth checking out.  -Sam

Editors note, it is currently on YouTube, check it out below:

4 thoughts on “The Unseen: Frat House”