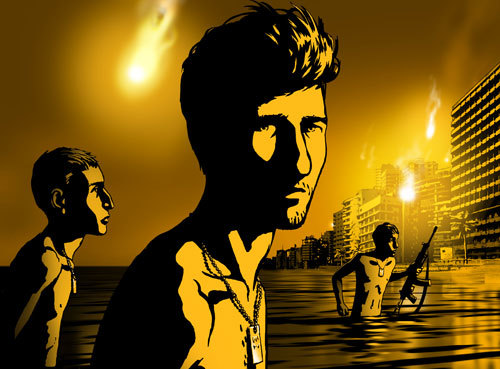 Beautiful.  That’s how I would describe Ari Folman’s animated dream-like documentary, “Waltz with Bashir.”  Beautiful.  I know it’s a strange word to use, especially when you consider that the movie is about the remembrance of the Sabra and Shatila massacre that left up to 3,500 dead.

As the film opens, Folman is talking with a friend who has this nightmare of being chased by 26 dogs.  Both Folman and his friend were in the Israeli army as young men, and Folman has no recollection of this time.

He decides to go around and talk to guys who were also in the army at the same time, so that he can remember.  He’s embarrassed that he can’t remember anything.  And then, very soon after his journey begins, he remembers.

It’s almost a dream, Folman and several of his fellow soldiers bathing in the sea in Beruit at night, as the city is lit by flares.  What is he remembering?  Why is this image important?  That’s the question the rest of the film tries to answer.

Everyone remembers differently and instead of finding footage that sort-of  matches what people are talking about, Folman has chosen to animate their remembrances.  It’s a brilliant choice, because the animation, although it’s quite realistic, adds a hazy layer to the stories, and is perfect for showing recollection.

To go into greater detail would spoil this movie that I walked in to pretty cold on the story and the subject.  I was sucked in almost immediately and didn’t move for the next hour and a half.

Folman has created a film that, while reeking of dread, of what might be remembered, of what has tried to be forgotten, is such a beautiful meditation on life.  Looking back, all of Folman’s interview subjects realize the folly of their ways.  They remember the nightmare of what they might have implicitly allowed or approved of by doing nothing; the slaughter of 3,500 people.

Who is to blame?  What actually happened?  Are the people who set off the flares so that the shooters could see as guilty as those who pulled the trigger?  Who authorized such atrocity?  Will anyone, ever, step and admit their part in authorizing the wrong-doing?

In such a terrible story, the beauty is hard to find, but it’s there.  From his depiction of a young soldier’s first days in the army, singing along to the radio, playfully shooting and blowing up anything in sight just because to one soldier, running into the middle of the street, shooting off his machine gun with no rhyme or reason, dancing, so it seems, with all the pictures of recently assassinated Lebanese president Bashir Gemayel.

The beauty in this film lies not in the story, which is horrific, but in the telling of it.  Folman’s use of images and dreams and fuzzy memories is something to behold.  Even as the picture coming into focus is more and more terrible, he presents the material in such a way that you can only look on in shocked silence.  “Waltz with Bashir” is easily one of the best movies of the year.  Sam