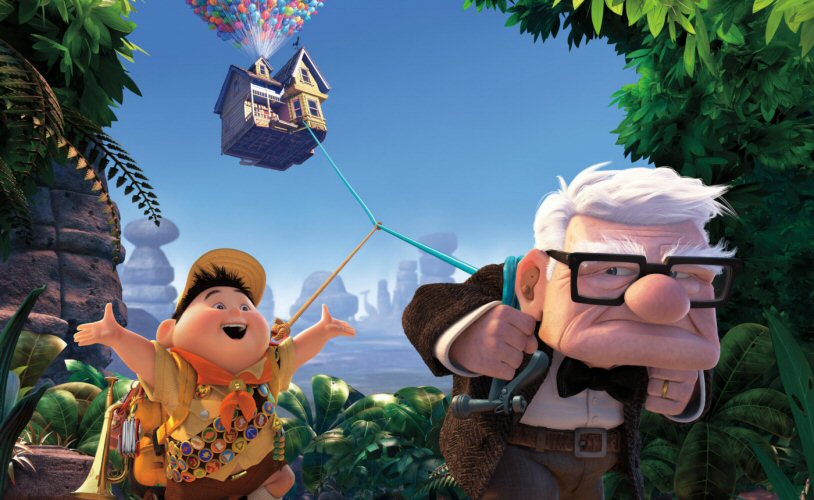 It seems strange that one of the immediate reactions following the ending of “Up,” is, “Pixar’s done it again.”  Their track record is pretty much impeccable.  And each film seems to be a step forward in storytelling and in the quality of animation.  “Up,” is no different.  In fact, it seems almost like it’s a given to say that Pixar’s latest movie is easily one of the best movies of the year.
“Up,” tells the story of Carl Franklin.  As the movie opens, we see Carl as an awkward and quiet boy.  He meets Ellie, a girl who shares his fascination with explorer Charles Muntz.  Following Muntz’s adventures, the two grow up and fall in love, dreaming of traveling and exploring South America, just like the famed adventurer.  Alas, Muntz is disgraced after the skeleton of a heretofore unknown animal is proven to be a fake.  And Carl and Ellie grow old together, always forced to reign in their dreams to a more manageable life.  Ellie gets sick and passes away.  Carl is left alone and angry.  Enter Russell, a Cub Scout-like wilderness explorer.  He needs to get one more badge before he can graduate to a new level of explorer.  Carl’s house is under siege by a construction company, currently developing all around it.  In a fit of rage, and using the dream that he and Ellie shared for so long, Carl ties a large number of balloons to his house, and tries to pilot it to the waterfalls that he and his wife so often dreamed of.

From the first frame of “Up,” you’re hooked.  After a newsreel briefly showing the work of Charles Muntz, the movie shows us Carl as a child.  And his meeting with Ellie.  And then in a wonderful, beautiful and incredibly touching (and practically silent,) sequence, we find ourselves in the present.

The movie does a good job of making you understand Carl’s feelings and where he is in his life.  He’s not just another cranky old guy.  You see first hand how he got there and you feel heartbroken for him.  To see him try to accomplish this goal that he and his wife dreamed of is so very moving.  (Being showing in some theaters in 3D, I think that among the many questions the movie asks, one of them is, ‘is it possible to cry while wearing 3D glasses?’  The answer, gladly, is yes.)

Everything in this movie is perfect.  The sidekicks, Dug and Kevin, a dog and a bird, respectively are wonderfully interesting and amusing characters.  There is also emotion in their story.  In fact, “Up,” is probably Pixar’s most adult movie in terms of themes.  That said, there’s more than enough for kids to enjoy and delight in.  (If it makes any of them think about other people, well, that’s just icing on the cake.)

Pixar has always seemed like a sure bet kind of studio.  No matter what the subject matter, no matter the story, it’s a movie worth watching.  “Up,” is no different.  In fact, it’s better than that.  It’s probably Pixar’s most accomplished movie, both in design and in execution.  “Up,” is the rarest of movies, one that entertains and delights, but has a very strong, and a very real heart beating just under the surface.  I cannot recommend this movie highly enough.  See “Up.”  -Sam