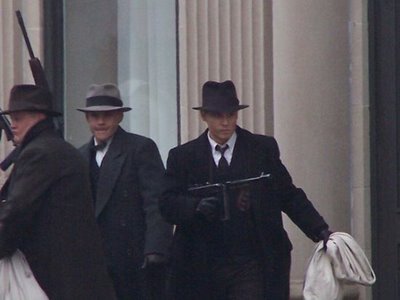 Put away the robots that are little more than an advertisement for the tie-in merchandise.  This is what a summer movie can, should and could be.

Michael Mann’s “Public Enemies,” is a study of gangster John Dillinger and the things that make a folk hero tick.  Dillinger was a bank robber, one who would steal not from the people making deposits, but from the banks themselves.  In an early heist, Dillinger passes a bank customer, who has laid out all the money in his pockets on the counter.  “Put that away,” Dillinger sneers, “I don’t want your money, I want theirs.”  And it was actions like that which made Dillinger such a folk hero.

Most people know how the Dillinger story ends, so Mann can’t surprise you there, but what he can surprise you with is the interest in the rest of Dillinger’s life.  He had a network of friends and allies, who took care of him when he needed to keep a low profile.  (Which was almost always.)  Johnny Depp’s portrayal of Dillinger is of a man who is also a seducer, one who knows what he wants and goes out and gets it.  He falls in love with Billie, a coat-check girl played by Marion Cotillard quickly and instantly takes her out of her life into his fast-moving one.

Dillinger has Melvin Purvis on his tail, a newly minted G-man, dispatched to Chicago by J. Edgar Hoover personally to catch Dillinger.  (Purvis attains recognition by killing Pretty Boy Floyd as he tried to outrun the police.)  Purvis does all he can, using the FBI’s recently created detection program to learn Dillinger’s whereabouts.

The movie then turns into a chase, as Dillinger tries to go about his normal life, and Purvis follows him, cutting off associates and safe-houses along the way.

Mann shoots the movie almost exclusively hand-held, with the jittery look giving you a ‘you are there,’ feel.  In the scene of the famous Little Bohemia Lodge shoot-out Mann gives you time to see what’s going on, unlike some other directors of summer movies.  Mann clearly lets you see who’s shooting at whom, and on top of that, he doesn’t just drop you in the action and let you figure it out for yourself.  Now, some may argue that quick editing is a way to raise the suspense level in a scene, and that an audience should feel like they’re in the middle of the gun fight.  Mann goes a different way, playing with the soundtrack, so the bullets whiz past your head, and every noise is sudden, sharp and loud.  You are there.

Mann continues his use of high-def video, which works great in low-light scenes, but shows some flaws with a lot of motion.  I’ve heard Mann used it to create a link to audiences today with characters from 80 years ago, but I’m not sure if it is a completely successful link.

But in a summer rife with movies aimed at audiences under the age of 16, it’s exciting and to see a movie aimed at audiences with intelligence.  Some critics have been going nuts for “Enemies,” perhaps because of the sparse landscape of intelligent movies, but nonetheless, “Public Enemies,” is one of the early standouts of the summer.  Check it out.  -Sam