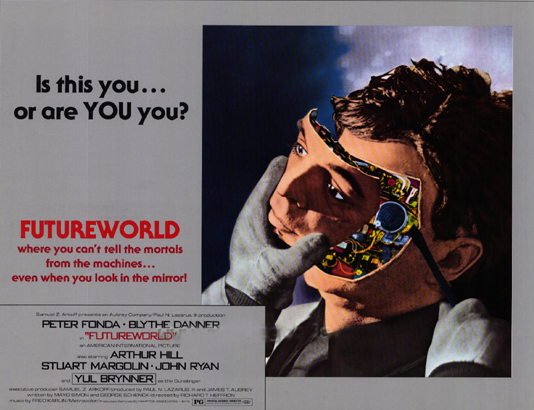 For some time, if a movie made money, the question has been not if there was going to be a sequel, but instead the question would be how bad will it be?  In 1973, when Michael Crichton made “Westworld,” it was only a matter of time before someone would come along and try to ruin any memories of quality.

“Futureworld,” continues the story begun in “Westworld.”  In the future, people will be able to attend a camp of sorts, where they would be outfitted in the time period of their choosing, (medieval times, ancient Greece, etc.) and would be able to partake in scenario that would make everything feel like they had traveled back in time.  The other people would be played by robots so, you could shoot anyone without guilt and you could sleep with whatever you wanted because, hey, if it ain’t got a pulse, it ain’t cheating.  And, in “Westworld,” that went fine until a robot, (played by Yul Brenner,) malfunctioned and started shooting back.  In “Futureworld,” two reporters, played by Peter Fonda and Blythe Danner, are back to the Delos amusement park, to write and report a happy story about how things have changed for the better since Yul shot up the joint.  Danner is a TV reporter and thereby easily susceptible to the company line that they feed her.  Fonda is an old-school newspaper reporter, and he knows something is going on.

Slipping through security and underground, Fonda finds out that the company is trying to replace various world leaders, successful businessmen and famous people with robots, thereby allowing Delos to take over the world.  Why would a company intent on building a really cool amusement park want to take over the world?  No one really says.  Why does the one disgruntled employee who lives underground with a robot he built of his own help them out, finally sacrificing himself for these two reporters that he just met?  I’m not sure.

Don’t get me wrong- I love bad 1970s sci-fi as much as the next guy.  However this movie seems intent on showing you all the inner workings of the amusement park.  I don’t want to know how they make it rain, I want to see this world that everyone talks about.  The movie was produced by AIP, taking over for MGM, who did “Westworld.”  It’s this move from one of the major studios to a smaller studio that seems to be the problem.  AIP was the perfect place for blaxploitation movies, but when you have to create other worlds, they get pretty cheap and start to make sets out of cardboard.  Not a good cost-cutting measure.

As an aside, why is it in these types of movies that the villian’s various henchpersons always are so serious about their job?  Why doesn’t at least one guy overseeing the robots have a sense of humor?  They always seem like they’ve got a personal stake in things, that if Peter Fonda gets the word out, that their stock will fall and they’ll loose the mortgage on their summer house?

“Futureworld,” is currently unavailable on DVD, but shows up on cable and on various peer-sharing sites.  It’s not wonderful, it’s not great, it’s not even good.  “Futureworld,” is passable, mediocre, and only worth seeing to indulge in your Peter Fonda fetish.  I’d recommend you rent “Westworld” again instead.  -Sam