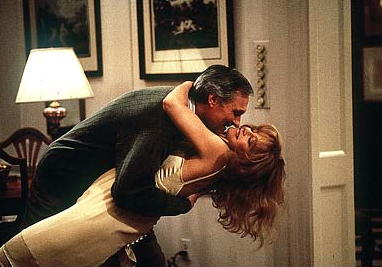 While I was watching Woody Allen’s latest movie, “Whatever Works,” I kept wondering if this was the end- if we were through with seeing great Woody Allen movies. I only had to remind myself that his last film won one Oscar, was nominated for a couple others, and also took home a couple of Golden Globes. It was this thought process that prompted me to return to “Everyone Says I Love You,” one of my favorite of his later films and, one that on paper seemed like a terrible idea.

“Everyone,” is a simple love story, following a New York family through one year. The oldest daughter, Skylar is about to become engaged to Holden as the film opens. It is early spring in New York and, as the trees come into bloom, you wouldn’t be surprised if people burst into song. And then they do. What starts off as rather odd very quickly becomes charming. Everyone, nannies walking babies down the street, salesmen at a jeweler’s, even mental patients at the hospital. In his movies Allen creates his own world, where seemingly everyone lives on the Upper East Side. In some ways, it only makes sense if all these people in this imaginary world also were singers. Meanwhile, Skylar’s three sisters are not as lucky in love. They’ve been spying on a friend’s mom’s therapy patients, and laughing at the stories. Then, while in Venice, daughter D.J., recognizes a woman as a patient. And D.J.’s dad has a thing for her. She gives him all the information she can about this mystery woman, later revealed to be named Von, and her dad, Joe, is off on a whirlwind romance, courting this woman, knowing all her passions and vices. The center of the story is Joe’s ex-wife, Steffi and her new husband Bob. But to go into any further detail would ruin the fun of the movie.

And that’s what it is. Fun. Complete, utter and total fun. While the familiar font of Allen’s opening credits signals many movie goers that they can relax, they’re in the hands of a master, this is one of his films that will add a smile to your face early on and it won’t leave until long after the movie is over. In fact, this is one of those transformative movies- you’ll look at your world differently after this movie. The effect of a viewing will linger with you for hours and, if you play your cards right, days.

The acting is all great and, it’s impressive to see the cast and see how many of them were still on their way up.  Natalie Portman plays one of the daughters.  Natasha Lyonne plays another, Edward Norton plays Holden in only his second film role, and Billy Crudup has a bit part as a momentary boyfriend.  The movie also stars Drew Barry more, Julia Roberts, Alan Alda, Goldie Hawn and Tim Roth.

The lighting and camera work are typical Allen, with many scenes played out in master shots which simply pan back and forth to cover the action. However, there is one sequence at the end of the movie that is the perfect cap to a perfect film. I don’t want to give it away, but, I’ll simply say, if it doesn’t move, touch and/or delight you, you’re probably already dead.

If you don’t like Woody Allen, I’m not sure this will be the movie to put back on track with his work. But maybe it might. It’s light and fluffy and a really fun way to spend a couple of hours. I think it’s easily one of his best movies, (and that’s saying something.) I highly recommend it. -Sam