Skip to content
home Movies, Reviews Review: In the Loop 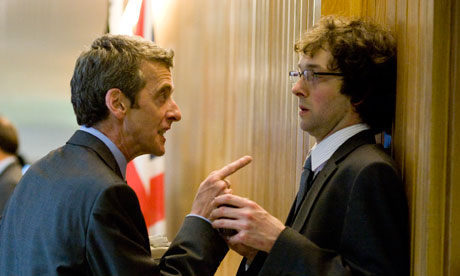 In a war of words, it’s not always he who yells loudest who wins.  For almost all of the characters in “In the Loop,” this is a lesson that has yet to be learned.  As the film opens, the Secretary of State for International Development says in an interview with BBC radio says that a war in the Middle East is “unforeseeable.”  The Prime Minister’s pitbull, Malcolm Tucker comes barreling into the office the next morning, spitting mad and, he doesn’t let up for the next two hours.  The secretary, Simon Foster, is anxious to make his name in politics, and, as he sees his opportunity slip away, he also can’t help himself from trying to make the situation better.  Not that he has the ability to do so.  Foster and Toby, his new assistant who report for work for the first time the morning following the “unforeseeable” interview, are quickly dispatched to the US to get out of the storm cloud that Simon has kicked up.  However, while war may be unforeseeable, so is everybody in the movie.  Things turn from bad to worse, and from worse to worser.

“In the Loop,” has many elements that call to mind Kubrick’s “Dr. Strangelove.”  The characters seem trapped in a maze, marching to their doom, but like President Muffley and General Turgenson in Kubrick’s film.  And it is this march that simply intensifies throughout the film’s running time.  Directed and co-written by Armando Ianucci, (a co-creator of the popular BBC series “I’m Alan Partridge,” with Steve Coogan,) the movie is a fast-paced, quick moving story.  In many scenes, it doesn’t matter what is being talked about, but how it is being discussed.  The language is tough and rude, but incredibly hilarious.   This is one of those movies that you find yourself quoting to friends as soon as the movie is over.  “Difficult, difficult, lemon difficult,” “Not you, lady from ‘The Crying Game,’” “I don’t want a war, the Olympics are hard enough.”  All instantly quotable.  You start off trying to remember your favorite lines and by the end, you’re overwhelmed to a point that you just let it wash by you as you try to catch and savor as much as you can.  It is truly an embarrassment of riches.  Ianucci doesn’t do anything special or memorable with the camera work, but that fits perfectly with the material.  Shot mainly hand-held, the frantic camerawork is a perfect complement with the material.

The cast is also wonderful.  Mostly stocked with actors that I’m not familiar with, they are all memorable and perfectly cast.  Tom Hollander is wonderful as Simon Foster.  And Chris Addison is also perfectly cast as Toby.  Peter Calpaldi is also amazing as Malcolm Tucker.  As soon as he walks on-screen, you know everything you need to know about Malcolm.  James Gandolfini plays a Pentagon official and Anna Chlumsky returns to the screen after bubbling under for years after debuting as the young love interest in “My Girl.”

“In the Loop,” kind of barrels over you in a way that, five minutes in, you feel like you’re in the thick of it.  It never lets up on the gas and never slows down to let you catch your breath.  If Simon, Malcolm and Toby don’t get a break to figure out what they’re in the middle of, why should the audience be afforded such luxuries?  While not for everyone, those who do get it will love it.  “In the Loop,” is an acquired taste, but yields rich rewards to those who sample it.  You might have to seek this one out.  I suggest you do so.  -Sam