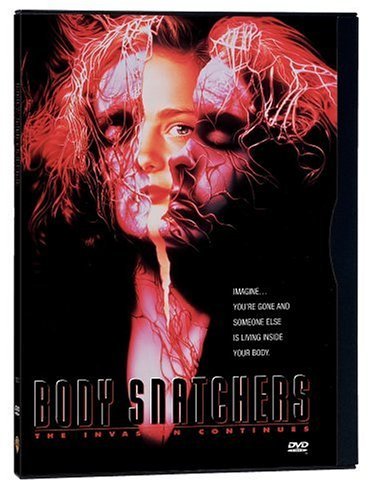 Abel Ferrara took on Jack Finney’s horror/sci-fi classic of aliens out to get the human race with 1993’s “Body Snatchers.”  While the story is effectively told and is a good tale, sadly it is inevitably compared to the two previous “Body Snatchers” movies which, for my money, are some of the best films of their respective genre ever made.

“Body Snatchers,” opens as an agent for the EPA arrives at a military base.  The story is narrated by teenage daughter Marti, who, as a teenage character in a movie, fights with her father and step-mother, and feels alone and mis-understood from the first frame.  At a gas station, Marti is accosted in the bathroom by a knife-wielding man, telling her, “they only can get you when you sleep.”  She, of course, freaks out, but not long after arriving at the base, she begins to notice people acting funny and, well, by that point the invasion is underway.  The invasion is a sneaky SOB.  It is a plant-like alien that attacks you when you sleep.  It’s vines and tentacles cover you and remove information from you and, while you sleep, this plant is growing a second arm, in a way; a duplicate you right next to the real you.  Except this duplicate is solely interested in getting others and moving pods around.

Unlike the earlier films, the concept of pods birthing people isn’t really worried about here and, sadly, the overall concept of paranoia and ‘they’re out to get us,’ is also absent.  And that is one of the key elements that is missing from this film.  By removing this sense of paranoia, the movie lacks the bite of the previous incantations of the story.  That said, it moves quickly and is exciting, and is head and shoulders above the fourth remake, “The Invasion.”  So, really, it becomes a question of being the unfortunate third child that, we’ve pretty much seen before.  We know many of the tricks and, frankly, it’s a got a lot to try to measure up against.

Ferrara’s direction is solid and unwavering.  He keeps his cards close to his chest, letting the story play out, and avoiding the temptation to hurry things up and get to the action.  He lets you grow attached to Marti and, sure, we’ve seen her story before, here there a few nice touches that simply make her a typical teenager and goes to lengths not to make her smarter than all the adults.  In other words, it’s realistic.  There’s a mood that permeates the movie from the first frame and, watching it, I got the distinct impression that it would be best watched late at night, where it could lull you into a sense of complacency, a ‘I’ve seen it all before,’ and then surprise you a little.  (Nothing big or grand here, it’s all little things.)

And that’s where we end up.  If you can appreciate the little things that this movie gets right, you’ll enjoy it.  If you’re expecting a third masterpiece from this story, you’re barking up the wrong tree.  Go check out the first two.  (And, it may be sacrilege to say this, but I prefer Philip Kaufman’s re-make a little more than the original…  Not that the original isn’t awesome- ‘cause it is.)  “Body Snatchers” isn’t a waste of time or even a terrible movie.  It’s solid.  It’s well made.  It’s well acted.  It’s only fault is trying to follow-up two masterpieces.  If you are interested in the intricacies of the plot and theme variations, check it out.  Otherwise, check out one of the others.  And, by all means, avoid “The Invasion,” like the plague.  That movie will truly suck the life out of you and place it in a pod if given a chance. -Sam