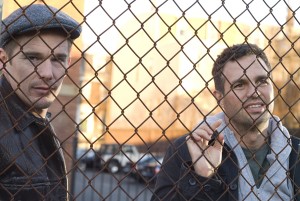 I had three reactions the ‘What Doesn’t Kill You” you trailer back late last year. My first reaction was, why does Hollywood think Boston is so full of crime. My second reaction was, hey, I kinda wanna see this. My third was, oof, I hate that title.

If ‘What Doesn’t Kill You’ played in any sort of limited release, I totally missed it. But as soon as I saw it on Netflix, I threw it on my queue. The film is inspired by writer/director Brian Goodman’s life before turning himself around. It’s the story of two childhood friends, Brian Reilly (Mark Ruffalo) and Paulie McDougan (Ethan Hawke). It opens on an armored car heist, before flashing back to their childhood. The two friends start doing odd-jobs for a local crime boss, Pat Kelly (Brian Goodman), who puts the pair on the wrong path.

Paulie and Brian grow up with no experience of an honest living. Though they’ve been working for Kelly for years, the two have ambition to do much more. However, Brian falls further into the darkness, becoming a crack addict, and neglecting his wife (Amanda Peet) and his two sons even further.

After his life of crime sends him to prison, Brian swears to turn his life around, to stay sober, and to get out of the life he once relied on to get by.

The film is basically about Brian’s struggle to leave the one thing he was always good at, so that he can lead an honest life for his family.

Ruffalo and Ethan are superb in their roles. I’ve always been a huge fan of Mark Ruffalo, he’s a talented actor who definitely embodies his characters (sidenote: I can’t wait to see how he does in Shutter Island).

The film is no doubt a very personal one for the first-time director. He shows great potential in this brooding, moody, at times dark film, and his solid direction carries over to the talent.

It’s a shame ‘What Doesn’t Kill You,’ didn’t get more press and a bigger release. Unfortunately, a drama like this doesn’t have the potential for a large following on DVD like ‘Boondock Saints,’ has, however, I definitely think it is a decent gem that is worth checking out.