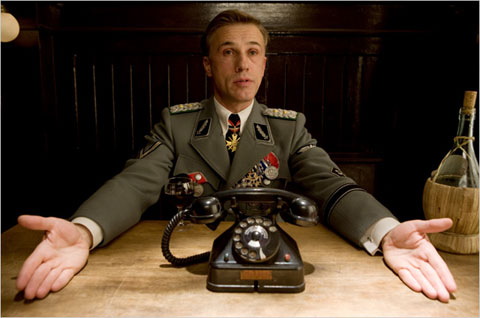 Only Quentin Tarantino could make a World War II movie like this.  “Inglourious Basterds,” is a more of a pastiche of the second World War than a accurate, detailed and correct study of the events of what happened in Nazi-occupied France.

The plot of the movie is simple in a way that doesn’t do the movie justice; a group of people decide to try to kill Hitler.  However, because this is a Tarantino movie, things are more complex.

As the movie opens, a French farmer is chopping wood as the Nazis arrive.  He sits down at his kitchen table with  Col. Hans Landa, better known as “The Jew Hunter,” for his ability to sniff out people hiding and rounding them up.  They talk for some time before getting down to business:  Landa knows that the framer is hiding Jews.  All the farmer needs to do is tell him where they are.  Landa says he believes in not punishing those who assist him.  However, things do not work out.  One young Jewish girl escapes.  It is her story that is the basis for the rest of the movie.

Meanwhile, a group of US soldiers, known as “The Basterds,” is on the hunt for Nazis.  Led by Lt. Aldo Raine, they are all Jewish-Americans, out to get revenge the torture undergone by their brothers and sisters.  Raine tells the soldiers that anyone who takes up with his unit that upon joining up, they owe him a debt of 100 Nazi scalps.  Being a Tarantino movie, I don’t need to tell you that you’ll see this debt collected.  Often.

Tarantino’s take on World War II movies is similar to his take in the past on revenge films or blaxploitation movies: he pays homage to many other movies and styles but, at the end of the day, you know from every frame who made this movie.  It has it’s own pace which, can sometimes run long, but you must respect Tarantino’s love for his characters.  (Some of whom are a little long-winded.)

The casting is also perfect, another Tarantino guarantee with every movie.  Brad Pitt’s turn as Raine is very good and entertaining.  Raine has a southern accent and is descended from bootleggers.  He sees the war as a chance to tip the scale of righteousness to the Allied side.  Diane Kruger is also good as German movie star Bridget von Hammersmark.  However, the standout star is Christoph Waltz as Col. Landa.  He plays the part with relish and a delight in language, however, with a hair-trigger temper and a deadly streak.

If there is any complaint, it’s that some scenes run too long.  The first scenes run maybe 10 minutes long each.  However, when you look at the movie later, and try to figure out what should be removed, it’s impossible to say with any certainty what should be cut.

There’s also some question about the concept of the Basterds.  Is the ‘eye for an eye’ theory of fighting really acceptable?  Is torture okay as long as it’s for the right reasons?  And who decides the right reasons?  And how guilty is any soldier for the sins of their higher command, especially if they did not execute the cruelty?  These are issues that Tarantino doesn’t really consider, nor care about.  This is not a movie you want to spend a lot of time considering ethics; this is a movie you sit back and enjoy.  Scalping as entertainment?  Sure… in a way.

If the best thing that can be said about a movie is that it makes you think and makes you want to see it again, “Inglourious Basterds,” succeeds wonderfully.  I have not stopped thinking about it since I saw it, and I can’t wait to see it again.  -Sam