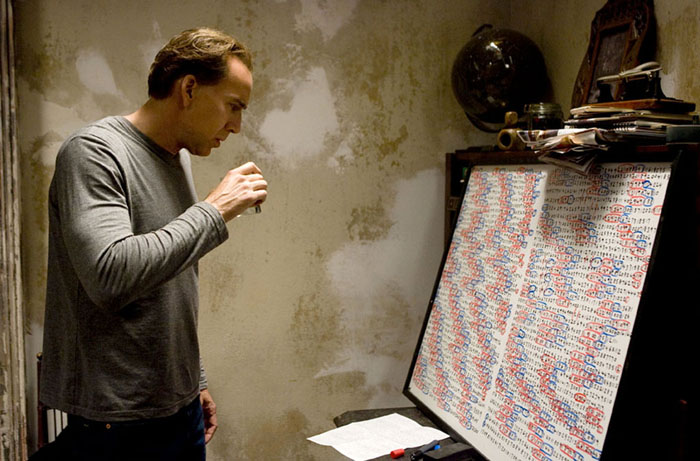 There are three words that, depending on your reaction to them, will say what you will think of Alex Proyas’ latest sci-fi thriller starring Nicolas Cage: CGI flaming moose.  Thoughts?

As “Knowing,” opens, a Lexington, MA school in 1959 prepares to celebrate its grand opening by burying a time capsule.  Each child is asked to submit a drawing of what the future will look like.  Most of them turn them in on time, but as the teacher approaches young student Lucinda, she is not drawing, but writing a series of numbers.  The teacher snatches the paper from her before she can finish.  Cut to 50 years later.  Nicolas Cage is John Koestler, a MIT professor.  His son attends the same Lexington school as Lucinda.  When the time capsule is opened, he receives Lucinda’s numbers.  At first, John dismisses the paper brought home by Caleb, his son.  John’s wife, (and Caleb’s mother,) has died, and, he suffers from a hearing difficulty, so, Caleb feels left out of a lot of things.  He and John both know sign language for no other reason than to pay off at the end of the movie in a touching and moving way.  John is fascinated by the numbers, but can’t figure out how to decode them.  He studies them for some time before he realizes that they are dates and the number of people killed in a natural disaster on that date.  The paper goes past the present date, so, John can wait to see what will happen to prove the prophesy, or he can try to fight it.

However, it’s hard to care about.  Since this is a sci-fi movie and because he is a widower in the story, Cage adopts a tortured, misunderstood genius pose, so his hair is kinda floppy and he talks in riddles, just so everyone can not understand him and assume he’s smarter than they are.  Also, having a son with a hearing problem is just another yoke around John’s neck.

Also, the ‘riddle,’ of the numbers is something played out to the nth degree, with such seriousness, that by the time that the big twist is revealed, the melodrama has been so great to that point, that you just don’t care.

And then there’s the issue of the special effects.  There’s a plane crash that, is supposed to elicit dropped jaws and cries of shock and awe from audiences and, it almost accomplishes that; except that director Alex Proyas presents the crash in one take and as Cage runs through the wreckage, (the fact that he can even do that is kinda surprising,) he encounters several passengers running around on fire.  The whole scene is so over-the-top, that you’re quickly taken out of the scene, and the movie.  Then there’s the CGI moose on fire.  It’s pictured as part of a nightmare but, is so terribly rendered, that you can’t equal the actor’s shock and surprise.  Instead, you laugh.

I’m not going to give away the ending, but let’s just say that Proyas and his fellow screen-writers took the easy way out and, frankly, it came out of nowhere.  And I don’t mean that in a good way.  Nicolas Cage is a good actor.  Alex Proyas is a good director.  Sadly, “Knowing,” is not either one’s best work by a long shot.  -Sam