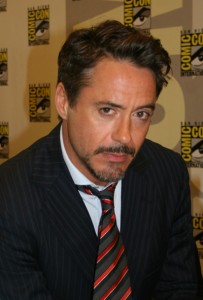 L.A. Times is reporting that Robert Downey Jr. is going to be taking on the role in Steven Spielberg’s adaptation of “Harvey,” a stage-play first adapted for the screen with Jimmy Stewart in the starring role.

The the classic Pulitzer-prize winning stageplay tells the story of Elwood P. Dowd and his best friend, a rabbit that no one else can see.

Jimmy Stewart received and Oscar nomination for his performance of Elwood. I think if anyone is suited for the part of Elwood Dowd, its Robert Downey Jr.

Other names thrown around were Tom Hanks, and Will Smith. But I’d be pretty happy to see Downey take this role.