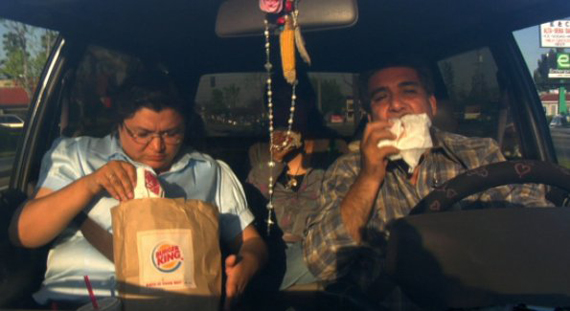 If you’ve read the books by Michael Pollan and Eric Schlosser, you know there is a problem with food in this country.  If you haven’t, take 90 minutes and check out the distilled, easily digestible (pun intended,) and incredibly informative movie by Robert Kenner, “Food, Inc..”

For many, “Food, Inc.” doesn’t include any new information.  However, Kenner presents it in such a way and, when it’s lumped together, it’s hard to ignore.  Companies in the US are making food cheaper, but they’re also making it deadlier.  Instead of trying to avoid E Coli in meat, the companies just create an anti-body.  When that stops working, they’ll probably create another.  They refuse to let the filmmakers into their chicken coops so that people can see how their chickens are being treated.  (Guess what?  The answer is ‘not well.’) With the cheapening of meat, the process becomes more centralized.  The number of slaughter houses in the US, for example, is shrinking.  Great news if you don’t like animals being killed.  Bad news when you realize that they’re just building them bigger now, making a whole lot more meat susceptible to disease.

But giant corporations don’t just limit their reach to meat.  They’re doing the same thing with fruits and vegetables.  Much of the US produced food is corn based because it’s cheaper.  Farmers who use their own seed and don’t buy processed seed find themselves blacklisted and sued for stealing patents.  And the government is part of the problem in all of this because they don’t shut down the companies employing illegal immigrants, they just arrest and prosecute the immigrants trying to make any money they can.

And how can you eat healthy when it’s more economically feasible to buy two hamburgers at McDonald’s than buy broccoli at the grocery store?  You can have all the good intentions in the world, but when you’re desperate to save a dollar, paying more than you have to for food is completely foolish.  Sure you’re going to get diabetes, but what are your other options?  Mortgage the house (which you probably don’t own) to pay for food that you can get elsewhere?

When you look at the above information, the future seems bleak.  Thankfully, says Kenner, that’s not the case.  He offers a look at Stony Field Farm Yogurt, a company that, despite being organic and healthy, finds itself getting its product prominently placed in the aisle at Wal-Mart.  Farmers, who it is claimed by the FDA that by killing and plucking their chickens outdoors is unsanitary, are finding their business up.  (To say nothing of the fact that their grass raised and killed outdoor chickens have less toxins in their bodies than a coop-raised chicken.)  Kenner interviews people who drive literally hundreds of miles to make sure local farmers know that their food is valued and wanted over company raised product.

If you read the newspaper, there’s probably very little new information in “Food, Inc..”  That, however, doesn’t make it not worth seeing.  For once, the picture isn’t completely bleak and Kenner ends on an up note, reminding the viewer that they hold the power, they are in command and, if they buy local and organic, things will change.  The people have the power, indeed.  -Sam

One thought on “Review: Food, Inc.”