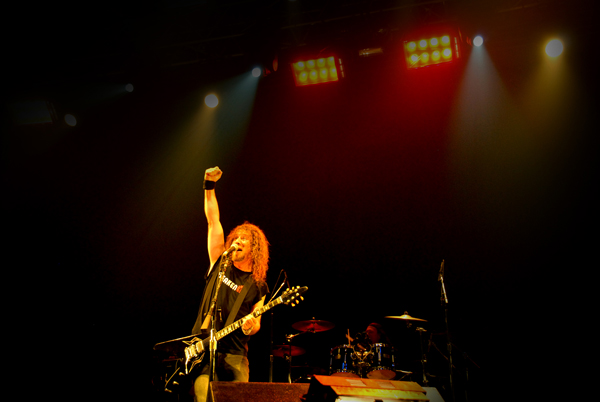 Rock and roll may never die, but sometimes it needs to take a part-time job.  In the 1980s, Canadian heavy metal band Anvil was on top of the world.  Touring with acts like Slayer, Metallica and Motorhead.  However, while these bands found a place at the top of the charts, for some reason Anvil never did.  But unlike some of the other bands, they never gave up on their dream.  Lead singer and guitarist Steven “Lips” Kudlow  and drummer Robb Reiner stuck with it, rocking out with whoever wanted to rock with them.  (Sadly some nights, the fans numbered in the low double digits.)

In 2005, screenwriter Sasha Gervasi, (“The Terminal,” and “The Big Tease,”) reunited with the band to follow them on a European tour.  In his youth, Gervasi had served as a roadie for the band, earning the nickname “Tea Bag.”  (A story that thankfully is not told in the movie.)  After the tour, which fails to re-excite the fans, Kudlow and Reiner team up with record producer Chris Tsangarides, to produce their 13th album, fittingly titled, “This is 13.”

While it might be easy to laugh at the foibles of older men attempting what is traditionally considered a young man’s job, there is heart in Lips and Reiner, and that’s what keeps both them and the movie going.  Lip says early on that his job is his job and his vacation is going out on tour, rocking out to the music he loves, playing for fans who love what he does.  How could life get any better?  A very good question.

When they meet with a record label executive trying to get them interested in distributing “This is 13,” the one thing they hone is on after the meeting is a throwaway line by the executive: the history of the band is money.  The fact that these guys continue on is something that people love.  And it’s easy to love these guys.  Maybe you’re not familiar with their biggest hit, “Metal on Metal,” and maybe you’re not a fan of heavy metal.  I’m not.  But it makes no difference, this is a love story, no different than “Casablanca,” or “When Harry Met Sally,” except in this case, Harry is Anvil, and Sally is the muse of heavy metal, beckoning these guys to keep going, no matter what.

“Anvil! The Story of Anvil,” is so wonderful, it’s almost hard to believe it’s real.  These characters are too amazing to be made up.  And it’s all true.  “Anvil” is easily one of the best movies I’ve seen this year.  And if we’re breaking it down by genre, it is the best love story I’ve seen in quite a while.  To put it simply, Anvil rocked all night long.  -Sam