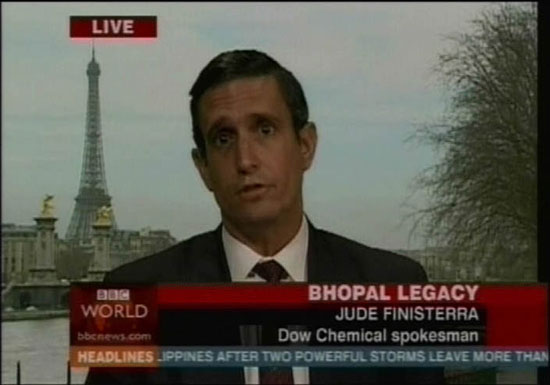 Who are the Yes Men?  Why does anyone care?  The Yes Men are two guys bent on calling attention to the actions of corporations and groups to the general public and making sure that they are held accountable.  Oh, and their methods are pretty amusing.

The first movie, “The Yes Men,” found them attending conferences posing as members of the WTO, and offering solutions to the hunger crisis by using human waste to feed people, showing how business executives could keep track of their employees by a large, phallic-looking device attached to a skin-tight ‘business suit.’

As their second film, “The Yes Men Fix the World,” opens, they are about to make the stock price of Dow Chemicals drop drastically in 20 minutes.  How?  Posing as a Dow spokesman on the BBC, they announce that Dow will finally take responsibility for a gas explosion in Bhopal that killed thousands and left 120,00 requiring care for the rest of their lives.

The first Yes Men movie, was simply an assembly of video that they shot of their various pranks.  What makes the second movie much better is the presentation.  While the actual video of their pranks is still hand-held and shaky, there is voiceover and linking scenes, (shot in their supposed ‘bunker,’) that help tie things together and explain what is going on in a way that greatly enhances one’s enjoyment of the pranks.  The two Yes Men, Andy Bichlbaum and Mike Bonanno, also are credited as directors, alongside Kurt Engfeher.

“The Yes Men Fix the World,” is a movie that could be seen as polarizing.  Either you enjoy their type of stunts, or you think they’re bringing some sort of disgrace to the proceedings and, in the wake of their actions, bringing false hope to innocent bystanders.  What’s great about this second movie is that they explore this charge and show that the so-called false hope ended for so many, (including those in Bhopal,) in joy because someone was showing the rest of the world what they were going through.  Either you like what they’re up to or you don’t.  And it is this that will quickly decide whether you will enjoy the second movie.  There’s nothing I can say to make you want to go see this if you think Andy and Mike are ridiculous people.  All I can say is that I really enjoyed the movie and you walk out of the theater wondering what you can do.  If the goal of the Yes Men is to call attention to problems in the world and empower audiences to join their cause, this is the best recruiting film there could be.  The first “Yes Men,” ended with a whimper and a shrug of the shoulders.  “The Yes Men Fix the World,” ends with a battle cry.  Recommended.  -Sam