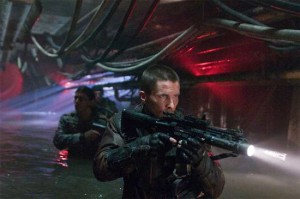 I know the title of this is ‘Review: Terminator Salvation,’ but in reality, I should title this article, “In Defense of Terminator Salvation.” The past films of McG haven’t been films I’ve been particularly a fan of, so handing him a treasured franchise like Terminator was definitely an idea that did not sit well with fans, myself included. My expectations going into this were lower then low.

‘Terminator Salvation,’ unlike the previous films takes place in a point of time in the universe that we’ve only just briefly scene during flashbacks. In the year 2018, Skynet, a computer created by man, is at war with the humans that remain in the post-apocolyptic world. An apocalypse that  was brought on by man, when the computer we turned on to rule our defenses became self-aware, and destroyed man before we could destroy it. John Connor (Christian Bale) is the prophesied leader of the resistance, and with his team, is testing a weakness in Skynet’s system.

Marcus Wright (Sam Worthington), was a death row inmate that donated his body to science. So when he awakes, 15 years after his “death,” he finds himself in this strange world that he does not understand. He runs into Kyle Reese (Anton Yelchin), the man who is eventually sent back in time to protect John Connor’s mother (and subsequently become John’s father).

The “future” showed in this is extremely different then the one we saw in Terminator 2. Obviously a result of different guy at the helm, as well as a different production designer. Also, while the other Terminator films (including the abysmal T3) had a slight bit of humor, this one is pure action. If I were to point out the most unrelatable character in the film, it’d have to be John Connor. As much as he’s central to the story, the Connor played by Bale was angry and cold. Bale ordinarily is a great actor, but something about him didn’t gel. Worthington and Yelchin were great though. The character of Marcus Wright, character deals with the guilt of his past sins, and Worthington gives it his all. Yelchin plays Reese well, a young naive teenager who believes in a resistance he’s barely a part of.

The thing that I liked most about Terminator Salvation was that the recurring theme of good terminator, naive kid, and bad terminator(s). The treatment of this is fresh, and I do think they succeeded in containing the spirit of the previous better films.

Problems? There were a few nitpicky things, a few production design choices I wasn’t a huge fan of, as well as a few lines. But all-in-all, it was a fun entertaining movie to watch with a huge bucket of popcorn. I think that after T3, anything would have been much better. Is it as good as T2? Absolutely not, nothing could be. But did it do the original justice and add some decent drama to the lore. Yes.

I don’t care what Harry Knowles says McG, you had me entertained from start to finish.