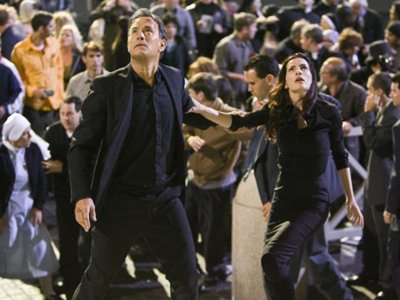 There are two types of Ron Howard movies: those that are clearly award bait, (“Apollo 13,” “Frost/Nixon,” “A Beautiful Mind,”) and those that are not, (“The Paper,” “Ransom,” and “The Grinch.”)  His most recent movie, an adaptation of Dan Brown’s best selling book, “Angels & Demons” is one of the later.

Tom Hanks returns as Harvard professor Robert Langdon, a symbologist, who has to crack a complicated code in an effort to stop a terrorist from wrecking havoc.  The Langdon character is better known for his leading role in “The DaVinci Code,” but on the page, “Angels & Demons,” came first.  Howard and screenwriters David Koepp and Akiva Goldsman have created “Angels” as a follow-up to “DaVinci.”

As the story opens, Langdon is brought to the Vatican.  The Pope has just died and, while the cardinals are preparing to vote for a new pope, four cardinals are kidnapped by a group claiming to by Illuminatti, an ancient group persecuted by the Catholic church hundreds of years ago.  A wireless camera shows a vial of anti-matter which, when its battery life dies at midnight, will explode and level the Vatican.  Langdon teams up with Vittoria Vetra, a scientist who helped create the anti-matter vial.

“Angels & Demons” is a puzzle movie.  Langdon and Vetra solve one puzzle, which leads them to the next and then the one after that.  Either you enjoy the chase and the puzzles that confront them, or you don’t.  You also know going in that there are going to be twists and turns and, eventually, some pretty unbelievable machinations before coming to a thrilling conclusion.

With these types of movies, you either have to accept it or not.  If you do accept it, you’ll enjoy in and revel in the ridiculousness.  If you don’t, you’ll be bored and won’t believe a minute of it.

The cast, led by Hanks is good, with Stellan Skarsgard playing the secretive and defensive Vatican city official and Ewan McGregor, a priest with dubious accent, who, as assistant to the previous pope, is head of the church until a new leader is chosen.  Vetra is played by Ayelet Zurer, an Israeli actress best known in the US for her roles in “Vantage Point,” and “Munich.”

Howard’s direction is not flashy or showy, he focuses on moving things along quickly and sprinting past some of the more unbelievable twists.  Dan Brown is not know for his quality writing, but the earlier adaptation of “The DaVinci Code,” felt too reverential, and the pacing was hurt.  Here, Howard makes some changes to the plot, and things move by much quicker, at a pace that a quality thriller should.