Skip to content
home Movies, Reviews Review: Up in the Air 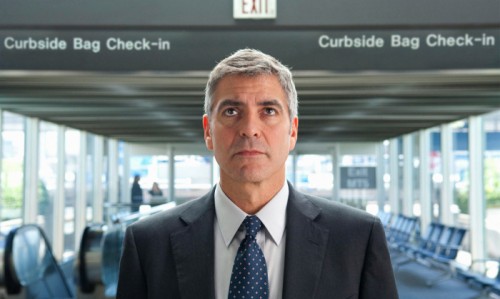 Ryan Bingham likes to keep things simple.  A constant traveler for work, he lives his life with his frequent flyer cards, his hotel reward programs, everywhere he goes, he is greeted with a chorus of, “it’s great to see you again, Mr. Bingham.”  Ryan Bingham is a professional down-sizer. When companies need to trim their staff down, they send in Bingham to be the hatchet man.  The work is not important to Bingham, it’s the lifestyle that the work allows him to live.  He spends as little time as he can in his apartment.  It’s too close to having a life.  He doesn’t seem to have friends, he has his job.  And his backpack of clothes.  As the movie opens, Ryan meets a fellow traveler, who lives by a similar ethos.  If they’re in the same city, or on the same layover, they’ll meet up.  Her name is Alex Goran and Ryan finds himself feeling something he usually doesn’t: he cares about her.

Meanwhile, things at work are getting complicated.  A young go-getter has come up with a way to virtually fire people on-line, thereby saving millions of dollars a year and thousands of miles in the air.  You sit down in front of your computer terminal, the firee sits in front of their terminal and they are told their services are no longer required.  Ryan thinks the concept is asinine.  You need to fire people face-to-face, you need to give them that respect.  To give the inventor a sense of what he does, he takes her with him on a trip, showing her that perhaps firing people isn’t as easy as she thinks it is.

This is Jason Reitman’s film and you can clearly see his imprint on the material.  Based on the book by Walter Kirn, it seems to have Reitman’s sensibilities throughout, much in the same way his first film, an adaptation of Christopher Buckley’s “Thank You For Smoking,” felt like a collaboration.

The cast is uniformly excellent.  George Clooney is outstanding, playing Bingham in a very subdued and carefully mannered performance.  Vera Farmiga, who usually disappears in her past films, (“The Departed,” “Running Scared,” amongst others,) is excellent here, playing Alex as the yang to Bingham’s ying.  Also impressive is Anna Kendrick, best known for her work in the “Twilight,” films, but turning an excellent performance as Natalie Keener, the inventor of the on-line executioner.  Reitman fills out his cast with some of his stock performers, veterans from his other movies, (Jason Bateman, J.K. Simmons, Sam Elliott,) who all work perfectly yet again.  The rest of the cast, mostly those facing firing are actual victims of downsizing, brought in by the filmmakers to re-count their initial reactions.  And it doesn’t feel like a gimmick.  It feels natural.

“Up in the Air,” is the kind of movie that sneaks up on you.  While you may not be expecting greatness, it sneaks up on you, introducing characters that may at first blush appear comic, but Reitman peels that away, quickly showing the vulnerabilities of each one in a way that draws you in.  By the end of the movie, there is a definite affinity and  caring for Bingham and his compatriots that I did not expect.  Much like “Juno,” “Up in the Air,” wins you over at first with charm, but quickly reveals a greater depth.  It is a movie that, upon walking into, you may not think you’re going to see a great movie, but by the end, you know you’ve seen something special.  It’s one of the year’s best.  -Sam

One thought on “Review: Up in the Air”