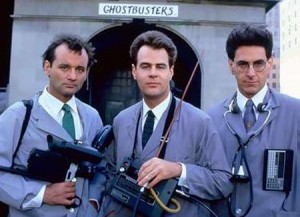 “Something’s going to happen. Dan [Aykroyd] did write a spec GB3 screenplay a few years ago, but no one was motivated to pursue it. Now, 25 years after the original, there seems to be some willingness to proceed and apparently a substantial public appetite for a sequel. We’ll introduce some new young Ghostbusters, and all the old guys will be in it, too. Think Christopher Lloyd in Back to the Future … GB3 is progressing with plans to shoot next summer and release in 2011.”

Of course this is nothing new, we’ve heard this countless times if not from Ramis, from Aykroyd.

Is this something I’d like to see? I’d be lying if I said I wouldn’t buy a ticket. Is it something we’re probably going to be much better off without? You bet your rear.

But if a sequel is something you crave, until then I suggest picking up the new Ghostbusters video game. It ain’t half bad.