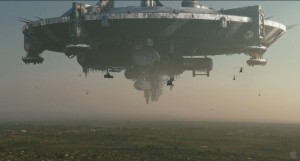 There has been a little bit of a controversy amongst some of my friends in regards to ‘District 9’ and its nomination for Best Picture. Although I’ll admit, the genre and class of film it was is not something that you ordinarily see up for such an award like Best Picture, but here I’ll try to defend why I think ‘District 9’ is amongst the better films nominated in the category.

‘District 9’ is a project that came about when producer Peter Jackson and director Neil Blomkamp decided not to produce a movie based on the video game franchise ‘Halo,’ but to instead make a feature film based on a short Blomkamp had produced called ‘Alive in Joburg.’

The film that came out was a daring, and extremely original piece of sci-fi entertainment that rivals ‘Avatar’ in its visual effects, and exceeds that same film in story. We are presented with a film in a documentary style, we follow Wilkus van der Merwe (Sharlto Copley in a stand out performance that is up to par with Christoph Waltz from ‘Inglorious Basterds’), a field operative for the MNU, who is in charge of moving a ghetto colony of aliens 200km away from Johannesburg.

Then, things take a turn for the worse, as Wilkus is exposed to a strange chemical, merging his DNA with that of the Aliens. An outcast of his own people, he is on the run, trying to find a cure to his genetic transformation. He teams up with one of the aliens to save himself, and hopefully, the alien vistors.

The transformation of Wilkus from an uncaring government official, to a selfish out for himself individual, to finally sacrificing himself to save the aliens is extremely well orchestrated. The transformation wouldn’t be what it is if it weren’t for the solid story, and stellar acting by Copley. The film is a perfect blend of drama, action, and science fiction. All in a backdrop riddled with insanely good visual effects.

It has been years since I’d seen a science fiction movie that felt so fresh and original, so enthralling, entertaining, and exciting. ‘District 9’ runs on all cylinders from start to finish.

‘District 9’ is an unlikely nominee, but when compared to the rest of the films from the year, there is something very special about it. I’d say the only other film nominated for best picture that I can compare it to as far as originality and uniqueness is Pixar’s ‘Up.’ Let’s face it, ‘Avatar’ was good, but only revolutionary because of its technical achievements. ‘District 9’ is much, much more.