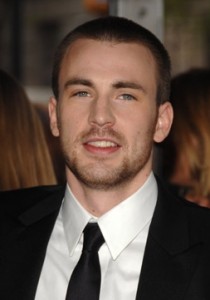 It’s official, after weeks of rumors, Chris Evans has been cast to play ‘Captain America.’

Chris Evans, already a veteran of superhero movies (he played the Human Torch in Fantasic Four) beat out a short list of actors that included Ryan Phillippe and John Krasinski.

The ‘Captain America’ film will be directed by Joe Johnson, and is scheduled for a July 22, 2011 release. Following this, will be ‘The Avengers’ in 2012, that will feature Iron Man, Incredible Hulk, and Thor, played by Robert Downey Jr, Ed Norton, and Chris Hemsworth respectively.

I’ve enjoyed all the recent Marvel adaptations, and I’m glad the rumors have been confirmed. I think Chris Evan’s is an actor capable of this role, so you won’t hear any fanboy complains from me! Now I just want to see the movie!