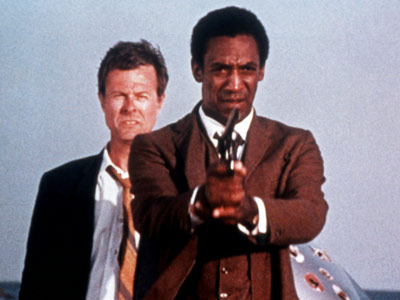 If you’ve seen every episode of “The Cosby Show,” and are disappointed that you haven’t seen Dr. Cliff Huxtable shoot anyone down in cold blood, have I got a movie for you.  1972’s “Hickey & Boggs,” re-teams Bill Cosby with former “I, Spy,” co-star Robert Culp. (Culp also directed the film.)  “Boggs,” is a typical 1970s film in the sense that it is dark, paranoid and moves at it’s own pace and is not going to speed up just to keep an audience happy.  While that can make if feel overlong and kind of lumpy, this was clearly part of director Culp’s plan- making a movie that doesn’t nothing to glorify detective work.

Al Hickey and Frank Boggs are a couple of LA detectives, who are tired of their jobs, their lives and their city.  Things seemingly pick up when they’re hired to find a missing girl.  But they seemingly don’t care.  They have pretty much given up on life, eating terribly, drinking worse and spending much of their time reveling in their misery.  The case isn’t that interesting and both Hickey and Boggs are not over excited to get involved.  Their job seems more like a chore and they have to try to psych themselves up to go and do it.

While this can make parts of the movie seem like tough going, there’s something admirable about Culp sticking to his guns and making the movie he wanted to make.  There’s also a sub-plot about counterfeited money being passed around, but it’s not a key element and, it doesn’t seem to really bug Hickey or Boggs all that much, so, really, why should it trouble us?

The script is by Walter Hill, (who wrote “The Getaway,” and “The Drowning Pool,” and later directed “48 Hours,” and “The Warriors,”) moves at a perfect pace.  Well, a perfect pace for Hickey and Boggs, restless audiences be damned.

What is most impressive about the movie is the attention to detail and the mundane.  Both Hill and Culp revel in it and it’s clear to see that they see these small facts as the most important parts to the story.  There’s a lot of similarities in tone and attitude, (to say nothing of one location, which both films share,) to Robert Altman’s “The Long Goodbye.”  Both are the kind of movies that probably play best late at night, when you’re by yourself and there’s nothing on TV and you want to get into a mood.  “Hickey” will put you in that mood and then keep you there.  Guarantee.

Culp and Cosby are both excellent in the movie too.  Sure, they aren’t playing their “I, Spy,” characters, but Cosby is doing actual acting, something that you don’t always see.  (I would highly recommend “Mother, Juggs and Speed,” for another example and that if you want to see him coast, you check out “Ghost Dad.”)  In fact, Cosby’s career since this movie opened has changed in such a way that it’s really interesting to see him working like this on a movie like this.  It’s really cool to see him trying to play a character other than the understanding but disappointed father.

“Hickey & Boggs,” will not change your take on films of the 1970s at all.  However, if you’re like me, and love everything about them, there’s a lot to enjoy.  Well, ‘enjoy’ might be a strong word, but maybe ‘admire.’  -Sam

Check this film out on DVD here.