Skip to content
home Movies, News Popeye in 3D in the Works 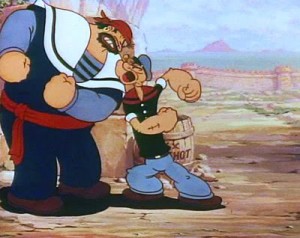 The iconic spinach eatin’ sailor is going to be hitting the big screen again, for the first time since 1980’s Altman adaptation. This time Sony is bringing an all-CGI ‘Popeye’ to the big screen, with the help of Avi Arad.

King Features Syndicate, the controller of the Popeye property brought Arad onto the project. Writer Mike Jones is in negotiations to adapt the story.

The exact storyline is still under wraps, but the film will feature Olive Oyl, Nemesis Bluto, and his adopted child Swee’Pea. The film is being made at Sony Pictures Animation, and in 3D.

It’s about time they bring Popeye to the current generation. Popeye is one of the longest running animated shorts, having been introduced in 1929 by E.C. Segar. I’m interested to see how they do with this, having it in 3D and all CG sort of worries me as I’m a traditionalist when it comes to historical animated characters, but, I think “that’s what the kids” want these days. I’m just glad to see they aren’t forgetting about Popeye.

2 thoughts on “Popeye in 3D in the Works”