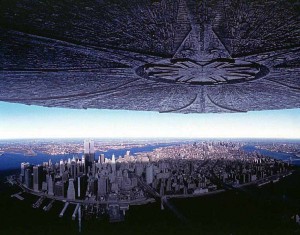 Cue the groans and eye rolls. Director Roland Emmerich is reuniting with actor Will Smith to turn their 1996 summer blockbuster ‘Independence Day’ into a complete trilogy.

One begs the question. Why? I’ll tell you why, ‘Independence Day’ was a huge success, and probably one of the biggest event films in my lifetime. Does that mean I want to see a sequel? Nope.

I enjoyed it, but I was 13 when it came out, so that is no surprise. Of course, I’m sure kids will enjoy these sequels too but is it really necessary to turn it into a franchise? I’m sure you could call it anything, people will still go, but I guess its that tie in to a successful blockbuster that’ll get those turnstiles turning faster.

Things I won’t want to see? Will Smith saying “Welcome to Earth…AGAIN” and punching an alien in the face.

The big question however in my mind is, since the last took place on July 4th, and this is a sequel, will the new batch of aliens also attack on the fourth of July? Guess I’ll have to wait and see.