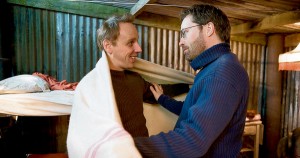 I recently caught wide open spaces at the Irish Film Festival of Boston. The film was directed By Tom Hall, and stars Ewen Bremner, and Ardal O’Hanlon.

The film opens at the apartment of Austin (Bremner) and Myles (O’Hanlon), with the two friends being evicted. It is clear from the get go that Austin is the comic relief, and Miles the straight man. Somehow, with no explanation, they end up taking a job working as hired hands at a famine themed amusement park that is under construction. They live on the property in an old tin shed, and are given day-today tasks by the owner, things like painting a famine boat, to setting out to collect money that is owed to their owner.

On one of these errands, Myles is tempted by the discovery of a wad of cash in the glove box of his boss. Myles is torn whether or not to ditch his bumbling friend and take the money, or bring him along.

The film tries very hard to be a buddy comedy, perhaps a pretentious attempt at a smarter “Dumb & Dumber” but the message is completely lost. In fact I can honestly say I’ve never been more bored at a comedy in my life.

Probably the most interesting characteristic of the film is how gloomy everything looked. This was probably the only thing that really worked for this film. The weather was dreary, overcast, all adding to the fact that the characters were in the doldrums of their lives. I will say that the actors did the absolute best they could given the source material.

The personalities of the two main characters were far too different in the way that they were played. Austin is far too goofy to be realistically friends with someone played as straight as Myles. On top of that, the story is terribly muddled. We spend a bulk of the movie with Austin and Myles, then suddenly are thrust into a side story with the boss, a character who has limited character development, and whose motivation we never really get to understanding.

I always try to find one redeemable quality in a film, especially an independent one like this, but unfortunately, I couldn’t walk away with one positive thing to say about ‘Wide Open Spaces.’ The movie never gels, in fact, there is nothing even remotely memorable about this film, perhaps other than my favorite part, the end credits.