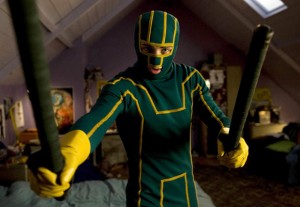 In an age of dramatic, brooding, dark super hero movies, ‘Kick-Ass’ stands out as a stellar reminder that sometimes, there are movies that are made just for fun. Movies made to appeal to an audience that just wants to see a fun story, and a bunch of bad guys get their ass kicked. I tried hard to not say this, but simply put, ‘Kick-Ass’ lived up to its title.

Based on a comic written by Mark Millar and drawn by John Romita, ‘Kick-Ass,’ is the story of one teenagers goal to become a superhero.

Directed by Matthew Vaughn and written by Vaughn and Jane Goldman, ‘Kick-Ass’ tells the story of Dave Lizewski (Aaron Johnson), a regular teenager who asks, “why has no one ever decided to become a super-hero.”

Following a mugging, Dave decides to create an alternate identity, ordering an interesting looking green wet-suit, and naming himself, Kick-Ass. After some serious mishaps, Dave realizes the answer to his question, as he quickly steps into something way over his head. His character states early in the film, if their can be Villains, why can’t their be super heros?

The villain is the leader of the New York crime syndicate, Frank D’Amico (played by an excellent Mark Strong), whose drug dealings have become threatened by another team of vigilantes, enter Hit-Girl (Chloë Moretz) and Big Daddy (Nicholas Cage).

As Kick-Ass gains notoriety, D’Amico believes its the masked vigilante is at the source of all his problems, but there is much more at work here.

The film simply is entertaining as all hell. All the situations are pulled from the best comic book stories, but set on a backdrop that is grounded more in “reality” (I use that term loosely) than most comics, which makes for some fun situations. The need to become a hero, the moment of realization, the transformation to a super hero, the arch-nemesis – all these standard super-hero/comic book movie moments are here.

Perhaps the only negative thing I have to say about Kick-Ass is regarding the CGI. At times the effects were a little on the rough side. But, given how enjoyable everything else was, this was quickly forgiven. 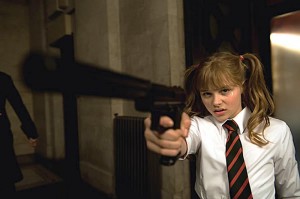 ‘Kick-Ass’ is ‘Superbad’ meets Comic-book movie, its hilarious, the action shot and edited extremely well, and the story line captivating. The actors were fun to watch, Strong, Johnson, Christopher Mintz-Plasse, and Cage were all excellent and memorable. But I have to specifically mention Chloë Moretz. Her character was half [insert a Dakota Fanning character here] and half Linda Hamilton (a la T2) on speed. She is hilarious, extremely bad-ass (yes I called a 13 year old bad ass), and her performance is completely convincing. She had a part in last summers ‘500 Days of Summer’ and has popped up in a few other films. Based on her performance here, she is certainly someone we are going to see a lot more of  in the next few years. Moretz is set to be in Scorsese’s next film ‘The Invention of Hugo Cabret’ and given her ability to act, its no surprise.

‘Kick-Ass’ won’t win any awards, but that’s not why they made it. They made it so people like me can go to the movies, and leave with a huge smile on my face. Check it out when it hits theaters April 16th.