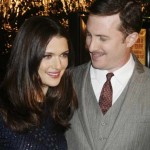 Darren Aronofsky has signed on to direct his fiancé Rachel Weisz in a biopic about Jackie Kennedy.

Originally planned as a television movie, the project has now taken shape as a feature. The script was written by Noah Oppenheim, and covers the four days between John F. Kennedy’s assassination and his burial.